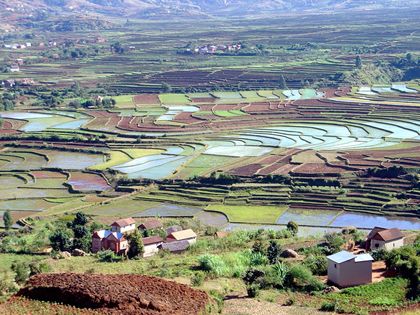 Madagascar is a poor country, with over 70% of the population falling below the poverty level of $50 a year. Its agriculture-based economy supports a majority of the labor force. There are substantial mineral deposits; and industry, which accounted for 11% of GDP in 1999, is centered on food processing. Madagascar sponsored an Export Processing Zone in 1991 and important investments have been made in tourism. Government efforts to strengthen the market economy have been erratic while corruption and political instability continue to constrain growth. The country's infrastructure remains poor, with inadequate roads preventing the transportation of agricultural products from farm to market. Railroads and the port system are also undeveloped, although the telecommunications system is being revamped. The IMF and World Bank in 2000 released tranches of the Poverty Reduction and Growth Facility, and Structural Adjustment Credit, respectively, to assist the country in reducing poverty and implementing market reforms conducive to private sector development. Also in 2000, Madagascar was approved to receive debt relief under the IMF/World Bank Heavily Indebted Poor Countries (HIPC) initiative.

The agricultural sector, which accounted for 34% of GDP in 1999, is prone to cyclone damage and drought. Rice is the staple crop although Madagascar has sought to diversify crop production by promoting maize and potatoes. Cassava, bananas, and sweet potatoes are also important. Export crops are coffee, vanilla, and cloves, with coffee the most important. A decline in world coffee prices by 2003 had held back growth. The sugar sector has been revived with the help of French investments.

Though Madagascar has a considerable diversity of minerals, their remote locations have discouraged extraction. Chromite, graphite, and mica are exported along with gems such as topaz, garnets, and amethysts. Private mining interests have been invited to develop Madagascar's gold deposits, as well as ilmenite, zircon, rutile, nickel, platinum, and bauxite. There has also been renewed interest in Madagascar's oil potential.

Madagascar is rich in biodiversity, and many plants and animals found there exist nowhere else in the world. Hence, ecotourism is a sector of the economy with great potential for development.

oh my goshthis is such a good sight. Its fast, easy, fun. GREAT

wow! this is a great sight!! gave me everything i needed... thans so much! ill be visiting related sites for other geography projects!
3
haley

thank you for the enformation it helped me with my class projet a lot. so thanks again
4
Tyler

This website was really good. It helped my finish my 5 page report on Madagascar on time! Thanks a lot for the great website!
5
emiral

wow! you just saved my world geo project.i would have failed otherwise with the economy!
7
Aredna

Thanks for the informartion but I would like to say, Madagascar is not a poor country, it has great wealth but has been impoverished so if you would like to invest, please be careful and try to find out the way to develop the country but not impoverish it again
9
Michelle

I am so sad about Madigascar. This sight helped me very well.
10
elvin

Thanks, this will help me with my project. Good work keep it up.
11
Lexi :)

Thankyou very much for this information. It was a huge help :)
12
Holly!

Thankyou so much for the information. This is a great site and i will use it for future projects :)
13
kailee

this is actully a pritty good sight for projects i would really recomend this!
14
Hannah

this site helped me a lot for my project!! thank you so much!!!
15
natasha

Thanks for the great advice. It really helped me in my activity at school. Thank Youso much! :)
17
Crystal

this website really help me with my geography project! thanks for the help
18
Anonymous

Thank you for dis. Helped with an assignment lots.
19
big boi

that you so much this gave me so much info that you again. i love this site
20
David

This is great! Im currently doing a research project and this got me finished!!!
21
Eric

This is very useful information that i needed for my project on madagascar for school. Perfectly writin and wonderfully organized
22
Sandra

This is a great page :D i love it and it gave me good information
23
Alexis

This website is great and helped me alot on some projects. Thank you for the reliable information! :p (recomend this to all)
24
General Mbabwe

wonderfully written and straight to the point. an enriching helpful and precise read.
26
kendall

i think this website is really good. It gave me everything i needed for my geography homework!