Transportation varies from dirt tracks suitable for camels and donkeys to a coastal highway extending for 1,822 km (1,132 mi) between the Tunisian and Egyptian borders. At the end of 1968, this highway was connected with a north-south road to Sabha; further extensions to Marzuq and Ghat were later completed, as well as a spur to Birak. In 1973, a 350-km (217-mi) road between Nalut and Ghadamis was completed. Roads also connect the Cyrenaica coastal centers with the interior. In all, there were an estimated 24,484 km (15,214 mi) of roads in 2002, of which 6,798 km (4,224 mi) were paved. In 2000, there were 424,100 private cars and 179,400 commercial vehicles registered in the country. Libya's two railway lines were closed down in the mid-1960s. All previous systems have been dismantled, and plans for new construction have shown little progress.

The main ports are Tripoli, Banghazi, Qasr Ahmad (the port for Misratah), and Tobruk. Crude oil export terminals include Port Brega (Marsa al-Burayqah) and Ras Lanuf. Since 1973, Tripoli's harbor has been developed considerably. As of 2002, Libya's merchant fleet had 23 vessels totaling 209,000 GRT.

In 2001, there were an estimated 136 airports, of which 58 had paved runways. Libya's two international airports are Tripoli Airport (34 km/21 mi south of Tripoli) and Benina Airport (19 km/12 mi from Banghazi). In 1968, a new airport at Sabha in the Fezzan was opened. Libyan Arab Airlines, established in 1965, operates to neighboring Arab countries, central and southern Africa, and Europe. Many major world airlines serve Libya. There is also regular domestic service, with airports at Tobruk, Port Brega, Ghat, Ghadamis, Misratah, and Al-Bayda. In 2001, 582,700 passengers were carried on scheduled domestic and international flights. 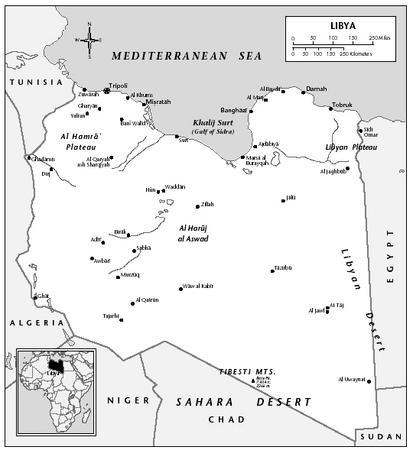