Liberia, together with adjoining Sierra Leone and Côte d'Ivoire, includes the greatest of Africa's evergreen forests. There are about 235 species of trees; 90 varieties are present in potentially marketable quantities, including mahogany and ironwood. The bombex (cotton tree), the oil palm, and the kola tree are common. The wild rubber tree ( Funtumia elastica ) is indigenous, but the cultivated Hevea brasiliensis is the source of Liberia's commercial rubber. A variety of coffee peculiar to Liberia, Coffea liberica , was formerly common but has given way to the preferred Coffea robusta . Fruit trees include citrus varieties, the alligator apple, papaya, mango, and avocado. Pineapples grow wild. Among the cultivated plants are cassava, cotton, cacao, indigo, and upland rice.

Elephant and buffalo, once common in Liberia, have largely disappeared, but several species of antelope are found in the interior; two of these, the white-shouldered duiker and the zebra antelope, are peculiar to Liberia. A lemur called Bosman's potto and several species of monkey, including the long-haired and the Diana, are found in the forests. Wild pigs and porcupines exist in sparsely settled areas, and several members of the leopard group are also found. Most of the 15 species of snakes are venomous. Termites build lofty nests throughout the country. In some areas the tsetse fly is found, and driver ants and mosquitoes are common. Several varieties of snail act as hosts in the propagation of certain enteric diseases. Among the birds are the hornbill, wild guinea fowl, cattle egret (cowbird), flamingo, woodpecker, and weaver. 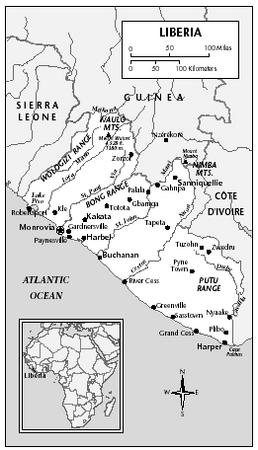