The fiscal year extends from 1 July to 30 June. Due to recent mismanagement of public funds, government expenditures are closely watched. Nevertheless, government spending has remained around 30% of GDP since 1995. While in the past decade Kenya has had some problems meeting loan obligations with the IMF and the World Bank, the country was set to receive over $300 million in aid from those organizations in 2000. However, problems with internal reform forced the IMF and the World Bank to suspend those programs, and as of mid-2002 they have not been reinstated.

The US Central Intelligence Agency (CIA) estimates that in 2000 Kenya's central government took in revenues of approximately $2.9 billion and had expenditures of $3 billion. Overall, the government registered a deficit of approximately $60 million. External debt totaled $8 billion. 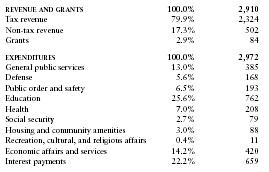