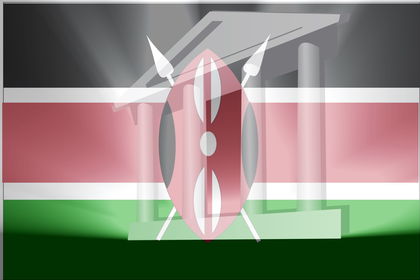 The legal system is based on the 1963 constitution, the Judicature Act of 1967, and common law court precedent. Kenya accepts compulsory ICJ jurisdiction with reservations. Customary law, to the extent it does not conflict with statutory law, is used as a guide in civil matters concerning persons of the same ethnic group.

The judicial system consists of the Court of Appeal, which has final appellate jurisdiction, and subordinate courts. The High Court, sitting continuously at Nairobi, Mombasa, Nakuru, and Kisumu, and periodically at Eldoret, Kakamega, Nyeri, Kitale, Kisii, and Meru, consists of a chief justice and 24 associate judges, who are appointed by the president of the republic. The High Court has both civil and criminal jurisdiction, serving as an appellate tribunal in some cases and as a court of first instance in others. Lower courts are presided over by resident magistrates and district magistrates. Questions of Islamic law are determined by qadis' courts. Military courts handle court-martials of military personnel.

Although the constitution provides for an independent judiciary, the president has considerable influence over the judiciary. The president appoints the High Court Judges with the advice of the Judicial Service Commission. The president also has authority to dismiss judges, the attorney general, and other officials upon recommendation of a tribunal appointed by the president.

nice article.would you kindly tell me in detail how the judiciary in kenya checks the powers of the other arms of government, namely parliament and the executive.with thanks.
2
ann wangui

Thanks for the article but could you further more information on the statutory law. merci
5
beadan

how is the hierachy of kenya courts in the new contitution.their juridictions
6
Tomas Ijun

Thanks for the information but I'm afraid it needs to be updated in line with the new constitution.
Being a constitutional Law student, It will be my pleasure if you allow me to update it.
7
Samson

Hi, I wish to know the procedure of filing a civil case involving your debtor as a company(if your employee steals from you and he/she agrees to pay back but fails). What are the requirements and how long does it take for the company to be paid back. Are the costs of filing the case imposed upon the employee?.
8
KATONO EMMANUEL

the article is brief and healthy but i advice that it will be better if u exhaust several matters.
9
JOSHWA TAMBO

Thanks for this information though i suggest Kenya Legal Systems could be included in relation to new constitution.
10
Benard Andeka

please may i know the jurisdiction of each court in the court system of kenya.
12
ANIARE AGGREY

I feel relieved getting this article about the Kenyan Judicial system,since I have sought it for quit a while.Unfortunately it doesn't cover all I was looking for.Would it be adjusted to be in line with the new constitution.
13
kevin imbalwa

THE ORGANIZATION IS GREAT.I WILL BE SO GREATFULL IF ONLY YOU PEOPLE WOULD ASSIST ME.
14
jonathan muiruri

Nice article, but i think you can align it to the 2010 constitution of Kenya.
17
sharnie

Ilike your article and i being a law student it has assisted me a great deal.keep it up.
19
esther

What are the relationships between the legal system of kenya and that of other countries in Africa, say Nigeria, Tanzania, South Africa.
can also kindly relate the Kenyan legal system to that of U.K and France. YOUR ANSWER IS HIGHLY APPRECIATED.
21
steve ochieng

while appreciating the court systems and powers that u have illustrated, i would kindly request that u give a full structure of the kenyan courts and their jurisdictions in line with the new constitution, please mention stng about supreme court. lastly, what r the functions of the office of the attorney general in kenya? thanks im advance
23
james w mbugua

i wish to be assisted to know the judicial court system.
24
Ajak Jok

The article is good, but it seems to have been passed by time... Update it and align it with the 2010 constitution.
25
KAMITHA

Am grateful for this article,being an aspiring student to venture into the criminal justice system.Would you please provide more information concerning the same in an in-depth scope?