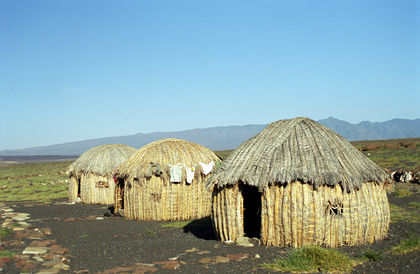 Agriculture remains the most important economic activity in Kenya, although less than 8% of the land is used for crop and feed production. Less than 20% of the land is suitable for cultivation, of which only 12% is classified as high potential (adequate rainfall) agricultural land and about 8% is medium potential land. The rest of the land is arid or semiarid. About 80% of the work force engages in agriculture or food processing. Farming in Kenya is typically carried out by small producers who usually cultivate no more than two hectares (about five acres) using limited technology. These small farms, operated by about three million farming families, account for 75% of total production. Although there are still important European-owned coffee, tea, and sisal plantations, an increasing number of peasant farmers grow cash crops.

From independence in 1963 to the oil crisis in 1973, the agricultural sector expanded by undergoing two basic changes: first, widespread acceptance of private ownership (replacing tribal ownership) and cash crop farming; second, the success of intensive nationwide efforts to expand and upgrade the production of African smallholders. Before World War II (1939–45) ended, agricultural development occurred almost exclusively in the "White Highlands," an area of some 31,000 sq km (12,000 sq mi) allocated to immigrant white settlers and plantation companies. Since independence, as part of a land consolidation and resettlement policy, the Kenya government, with financial aid from the United Kingdom, has gradually transferred large areas to African ownership. European-owned agriculture remains generally large-scale and almost entirely commercial.

After the 1973 oil crisis, agricultural growth slowed as less untapped land became available. Government involvement in marketing coupled with inefficient trade and exchange rate policies discouraged production during the 1970s. Coffee production booms in the late 1970s and in 1986 have in the past temporarily helped the economy in its struggle away from deficit spending and monetary expansion. Although the expansion of agricultural export crops has been the most important factor in stimulating economic development, much agricultural activity is also directed toward providing food for domestic consumption. Kenya's agriculture is sufficiently diversified to produce nearly all of the nation's basic foodstuffs. To some extent, Kenya also helps feed neighboring countries.

Kenya is Africa's leading tea producer, and was fourth in the world in 1999, behind India, China, and Sri Lanka. Black tea is Kenya's leading agricultural foreign exchange earner. Production in 1999 reached 220,000 tons. Tea exports were valued at $404.1 million in 2001, or nearly 18% of total exports. The tea industry is divided between small farms and large estates. The small-scale sector, with more than 260,000 farmers, is controlled by the parastatal Kenya Tea Development Authority. The estates, consisting of 60–75 private companies, operate on their own.

Coffee is Kenya's third leading foreign exchange earner, after tourism and tea. In 2001, coffee earnings totaled $91.8 million. Production in 2001/02 amounted to 52,140 tons. Similar to the tea sector, coffee is produced on many small farms and a few large estates. All coffee is marketed through the parastatal Coffee Board of Kenya. The suspension of the economic provisions of the International Coffee Agreement in July 1989 disrupted markets temporarily, driving coffee prices to historical lows.

Kenya is the world's largest producer and exporter of pyrethrum, a flower that contains a substance used in pesticides. The pyrethrum extract, known as pyrethrin, is derived from the flower's petals. A drop in production during the mid-1990s was due to increasing production costs, disease damage, and slow payment by the parastatal Pyrethrum Board of Kenya. The growing demand for "organic" and "natural" pesticides has increased international demand for pyrethrin, despite the existence of synthetic chemical substitutes. Kenya also produces sisal, tobacco, and bixa annatto (a natural food coloring agent) for export.

I found what you have writen about agrculture in kenya very interesting and i have learned alot thank you for sharing this information with me.
2
Flo

Asante sana, tryin to finish up my thesis and this couldnt have come at a better time.
3
joe

THANKS for this article. it is very important for students and other parties. it has helped with my thesis
4
Mwinjiro Vincent

This is an influential article; I found it containing decisive points especially to the contemporary generation. It is simple and easy to understand.
5
Beaty

Thank you very much it has helped me alot and it is very educative.
6
gordon

thanks a lot for this information. it has been of grat help to me.
7
Mbuthia

This information is a very important resource to anybody doing research on Kenya's Agriculture. It is very enlightening and it is in very clear, easy to comprehend language. It summarizes the country's mainstay into a page, without losing important data. Thank you.
8
Philip Oloo

I have gone through the article. It is a good contribution for those making inquiries about agricultural sector in Kenya. Thanks.
9
(:

Thanks muchly this really has helped me on my homework :) xo
10
Collins Karani

Quite an informed piece indeed. But how about the large pineapple plantations I see around Thika? Just thought of the potential agricultural diversities and what else is likely to add up to the list. Well done.
11
edward

The article is informative. If the statistical provided herewith are correct, then good research work! I encourage provision of more articles.
13
Chacha

I liked the article,it has helped me do my term paper
14
James manyara

Thank alot for the information am a tour guide and currently i have a package which am offering that is Agro-tourism and information about kenya Agriculture has been of greate help.please just to try to Add more detail on arears in kenya where the coffee,tea or horticulture is done by smalland large scale farmers,that would be nice. james kamau manyara
15
Emma

Thank you your information was very helpful :) I have learned a lot from this information :)
16
Jenn

heya, thanks so much for the information on Kenya's agriculture. extremely education, i learnt a lot and it was very helpful to the story i'm writing - thanks so much!
17
James Omar

i can comfortably carry on with ma research having this information.it a nice work from ma motherland-Kenya..thanks for these responsible,i need more of this
18
oli e

very helpfull and intresting thank you
it was easy to understand. helped me with my prep and for that i am gratefull
19
John

Thanks for this, looking into agriculture in general and this came in very handy!
20
abraham

scholars this is great work.keep up on educating us as we search for this knowledge
21
Anthony

For those who are doing their thesis on tea and coffee production,please visit the community,alot to learn i view it differently there is poverty enviromental degradation lack of biodiversity and empowerment to wemen and youth .Was born on Tea farm has some tea bush but currently living in USA
22
Viola

Good information for my research.could someone update me on squatters,please.
23
wanyonyi barasa

vERY INFORMATIVE. IT HAS ENABLED ME TO PREPARE A PAPER IN A CONFERENCE IN CAPE TOWN
24
linus o

we can only make necessary improvements in our agricultural sector if articles like this are made available, more frequently. this is definitely a good contribution.
25
chomba

It is quite good to have this theory about coffee farming ,but my question is why do the farmer get the smallest portion or benefit from this product.The farmer plant the coffee tree,maintains the tree,harvest the beans ,take them to the factory .But waiting for the pay ,i.e 1kg was sold at ksh 100 why the farmer get less than ksh 20.But this is now improuving.Thanks.
26
Ever

Thanks so much for availing such information, they are very useful especially for some of us who have interest in revitalizing agriculture in kenya. Please avail more information and particularly on pyrethrum crop.
27
jim

this is not very clear, can you just make a list of what they sell
28
Kathrine Kithinji

Nice article its very educative, and shows that there is room for growth in the agricultural sector in the country.
29
Beritah Mutiso

This is a very educative article. Please give us an update as of 2011.
30
Titus

Fantastic information, i appreciate Kenyan due to good development program specifically on strengthen proper mananagement of resource. The above article is vital to everyone, Although am Tanzanian still liking Kenya and i known Kenya.Am organic farming specialist.Thanks alot and Goodluck!
31
Dominic Simbe

The focus is concentrated at crop agriculture only. It can be better if livestock issues are also spotlighted too. I believe sectors like dairy are worthy to be mentioned. Otherwise good efforts are appreciated/ Keep it updated.
32
annie

Thanks so much for the information, it has helped me a lot in my assignments
34
rintari

thanks for the article.its quite educative and informative.good for researchers because the language is simple
35
tabitha karimi

The article is quit informin. Then should kenya put more resources on cash crops or food crops. Considering that it always faces food crisis.
37
ivy quamboca

Magnifique,this is the best article ever found about agriculture.You guys are great it has really helped me in my reasearch.thanks alot.
38
Abdifatah Iman

Really,This article helped mi a lot, i would 2 thank the genous people who wrote this interresting information,
keep it up.
39
Asoneth

A lot of information that I was not aware of. Trying to complete a paper based on TRIZ..focusing on deforestation around the Mau. I needed to give background information about the country and this was just perfect.
40
agnes upendo

this article is very informative despite it being an old one, it has helped me a lot in introducing my term paper.keep up
41
mac

Thenx, this really helped me tackle my assignment.Am greatful that you guys are of much help to us students.
42
J.C.

was very helpful towards a profect on the Kenyan agriculture very clear, simple language and well written.
43
jared onyancha nyangena

thanks so much for updating us. this article has assisted me to wind up with my assignment. keep it up1
44
Jonathan

This is one of the most informative article on agriculture.I have liked it.
45
ann kamwila

Was very helpful. i like it. it is written in a simple language,and easy to understand
46
Madi

Thank you for putting all that information together.
This was very helpful for me to complete my essay.
47
SIMEL OLE SENTERO

Nice literature, it is of great help-to enable me start a term paper
50
PATRICK KEMBOI

what an awesome article. it has helped me a great deal now that am undertaking my project on agricultural diversification in Uasin Gishu County. cheers!
51
nur

Feeling grateful to read your article.Good info for my group case study.thanks.
52
fabs

My assignment at the university could not have been complete without this artile. Thank you so much and may God bless you abundantly.
54
susan

I found this information very helpful. thank you and God bless you.
55
Otieno brian

It is an enlightening work and informing.it has helped me do my class course of agricultural trade and international economics.kenya we have the potential in agriculture to tranform our economy.i appeal to all graduates be it locally or internationally to team up and have hand in agriculture.lets invest in agriculture and provide grants.
56
kagame

This is nice work and well done and easy to understand, it has assisted me with my research work
57
Musanyi Dysmuss

This article is so informative,it has greatly helped me in the project research while in Egerton University
58
faysmiley

this article has really been so helpful to me especially in my assignments.
59
fenner

The article is very informative to different readers,it has been very helpful to me in particular when teaching and resource in the paper am working on.
60
joan

thank you for the article;it has been very informative although it needs updating but still t is very good...
61
Gabriel Mut Pur

I would like to do farming in Kenya, is it permissible for foreigners to stay, own farm lands for export purpose? If so how far the Government supports ?