The earliest inhabitants, hunters and fishermen, were replaced by the Baga and other peoples who came from the east. The Portuguese explorer Nuno Tristão arrived in the region in June 1446 and established the first trading posts. The slave trade developed during the 17th century, centering around the port of Bissau, from which thousands of captive Africans were sent across the Atlantic to Latin America. Portugal retained at least nominal control of the area, and British claims to coastal regions were dismissed by arbitration in 1870. Nine years later, the area was made a separate Portuguese dependency, administratively subordinate to the Cape Verde Islands. Portuguese Guinea's boundaries with neighboring French possessions were delimited in an 1886 treaty, and formal borders were demarcated by a joint commission in 1905. The interior was not effectively occupied until about 1920, however, and Portuguese never settled in large numbers in the colony. In 1951, together with other Portuguese holdings in Africa, Guinea was made a Portuguese overseas province.

In September 1956, a group of dissatisfied Cape Verdeans founded an underground movement aimed at achieving independence from Portugal. It was named the African Party for the Independence of Guinea and Cape Verde (Partido Africano de Independência da Guiné e Cabo Verde—PAIGC), and Amilcar Cabral became its secretary-general. On 19 September 1959, after more than 50 Africans had been killed during a dock strike that erupted into a violent clash with police, Cabral called for an all-out struggle "by all possible means, including war." By 1963, large-scale guerrilla warfare had broken out in the territory.

During the ensuing years, PAIGC guerrillas, fighting a Portuguese force of about 30,000, increased their hold on the countryside. When Cabral was assassinated on 20 January 1973, reportedly by a PAIGC naval officer, Aristides Pereira took over the leadership of the movement, which on 24 September 1973 unilaterally proclaimed the independence of the Republic of Guinea-Bissau.

Prospects for a PAIGC victory improved dramatically after 25 April 1974 when the Lisbon government was overthrown in a coup. The leader of the new regime, Gen. António de Spínola, was a former governor-general and military commander in Portuguese Guinea, and had become an advocate of peaceful settlement of the war. On 26 August 1974, the Portuguese government and the PAIGC signed an agreement in Algiers providing for the independence of Guinea-Bissau effective 10 September, removal of all Portuguese troops by 31 October, and a referendum to determine the future status of the Cape Verde Islands.

The new government, under President Luis de Almeida Cabral, brother to Amilcar Cabral, had to deal with extensive economic dislocations brought about by the war. On 27 September 1974, the government announced its intention to control all foreign trade, and in May 1975, the legislature approved a program to nationalize all land and to confiscate property belonging to persons who had "collaborated with the enemy" during the war.

In the first post-independence elections, held December 1976–January 1977, 80% of the population approved the PAIGC list of candidates for Regional Council membership. The 150-member National Assembly, selected by these representatives, convened on 13 March 1977. Luis Cabral was reelected president of Guinea-Bissau and of the 15-member Council of State, and Major João Bernardo Vieira was confirmed as the nation's vice president and as president of the National Assembly.

On 14 November 1980, President Cabral, a mestiço with close ties to Cape Verde, was overthrown by a group of Guinean blacks under Vieira's command. Severe food shortages and tensions in 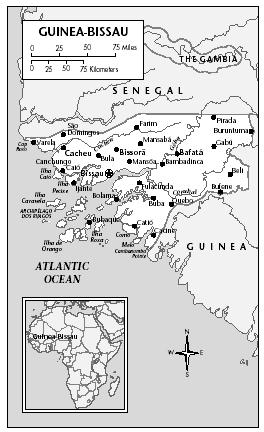 the alliance between Guinea-Bissau and Cape Verde had precipitated the bloody military coup, which led to the dissolution of the National Assembly and Executive Council, suspension of the constitution, arrest of the president, and temporary abandonment of the goal of unification with Cape Verde. A Revolutionary Council composed of nine military officers and four civilian advisers was named on 19 November, and a provisional government was appointed the following day. Diplomatic relations with Cape Verde, suspended at the time of the coup, were resumed in June 1982.

The National People's Assembly, reestablished in April 1984, adopted a new constitution in May. It also elected a 15-member Council of State to serve as the nation's executive body. As president of this council, Vieira served as both head of state and head of government. In July 1986, following an abortive military coup in November 1985, six persons were executed and another five died during detention. After ruling Guinea-Bissau as a one-party state for ten years, Vieira denounced single-party rule as elitist, inherently undemocratic, and repressive. In April 1991, Guinea-Bissau formally embraced multipartyism and adopted a new constitution. Four major opposition parties formed the Democratic Forum in January 1992 and sought to unseat PAIGC.

Elections scheduled for November 1992 were postponed until March 1993, giving the 11 opposition parties time to campaign and the multiparty electoral commission time to work out electoral procedures. They were again postponed until March 1994. On 17 March 1993, João da Costa, the leader of the Party for Renovation and Development (PRD), was implicated in an attempted coup. On 4 February 1994, the supreme military court acquitted him.

In July 1994, Guinea-Bissau held its first multiparty legislative and presidential elections. João Bernardo Vieira was elected president, narrowly defeating Koumba Yala with 52% to 48% of the vote. The PAIGC led decisively in the Assembly elections with 46% of the vote. In October, Vieira appointed Manuel Saturnino da Costa Prime Minister. In 1995, a coalition of opposition parties reformed the Democratic Forum, appointing da Costa as its leader.

The PAIGC reelected Vieira as party leader in May 1998, but he was nearly overthrown in June when army mutineers staged an unsuccessful coup. The coup attempt triggered a brief but devastating civil war. Upon Vieira's request, Senegal and Guinea sent 3,000 troops to restore order. Bombardments destroyed the main hospital, damaged schools and markets, and displaced thousands. The World Food Program and the Red Cross provided emergency services to an estimated 130,000 of these victims. In November, the Abuja peace agreement was signed with the stipulation that presidential and legislative elections be held before March 1999.

In May 1999, following the dismissal of General Ansumane Mané, troops loyal to the general stormed the presidential palace. Some 70 people died in the assault. Vieira took refuge at the French Cultural Center, and later sought asylum at the Portuguese Embassy. He was allowed to leave for Lisbon after renouncing the presidency and promising to return for trial. Malam Bacai Sanha presided over the interim government, which ended the 11-month civil war.

In November 1999, National Assembly elections took place, and in January 2000, Sanha lost to Koumba Yala in presidential elections judged free and fair. On 24 January, President Yala appointed his close friend, Caetano N'tchama, prime minister. Despite the elections, the country had a parallel government in the form of the military junta. In November 2000, Mané revoked Yala's military appointments and fighting erupted between forces loyal to the government and supporters of the Junta. After regaining control, loyalist forces announced on 30 November that Mané had been killed.

Yet another crises ensued in January 2001 when the RGB/MB withdrew from the government, charging that it had not been consulted over a cabinet reshuffle and calling for N'tchama's dismissal. N'tchama was fired in March, leaving a number of issues for his successor including the detention of about 130 members of the military accused of supporting Mané, and the alleged involvement of Guinea-Bissau in the Casamance conflict. Health, education and other social sectors were seriously under-funded, and underpaid civil servants were demanding higher wages. In addition, thousands of weapons were in private hands, and newly graduated young people had few or no prospects of employment after leaving school. Yala announced in December 2001 that his government had foiled another coup attempt.

In November 2002, Yala dissolved the parliament and named Mario Pires prime minister. Yala arrested his defense minister on 30 April 2003 on charges of plotting a coup, and in June he held emergency talks with disgruntled military leaders and key ministers to prevent the collapse of his government. Under pressure from the UN Security Council to hold clean elections, Yala announced in June 2003 that parliamentary elections originally scheduled for 23 February and then pushed back to 20 April and then July 6 would be postponed yet again to August or September pending revision of the electoral roll. By July 2003, Yala's government owed six months in pay arrears to the army and civil service. In lieu of monetary remuneration, government workers were receiving payment in rice. In the words of the UN Secretary General Kofi Annan, the economy and government of Guinea-Bissau were on a precarious downward course.

Relations with Senegal have been strained over issues stemming from the Casamance conflict in Senegal, and over demarcation of the Bissauan-Senegalese border established by an agreement between Portugal and France in 1960. In 1992 and 1995, Senegalese warplanes bombed suspected rebel bases in Guinea-Bissau alleged to be safe havens for Casamance rebels. In March 1996, the two governments reached an initial accord, and in 1999 through the mediation of President Jammeh of the Gambia, leaders of the two sides concluded an agreement. However, skirmishes continued into 2001 necessitating the intervention of the UN Secretary General.