The government's development program has been largely devoted to improving internal communications; nevertheless, both road and rail systems deteriorated in the 1980s. Rehabilitation began 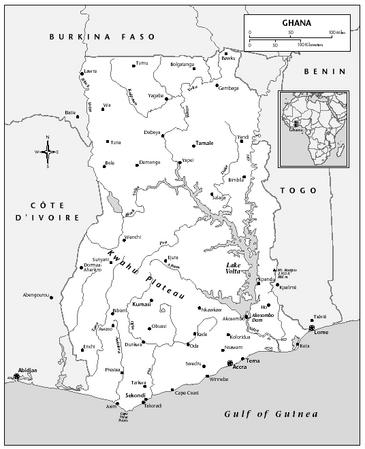 in the late 1980s, with priority being given to the western route, which is the export route for Ghana's manganese and bauxite production and also serves the major gold-producing area. Rail lines are also the main means of transportation for such products as cocoa, logs, and sawn timber; they are also widely used for passenger service. There were 953 km (592 mi) of railway in 2002, with the main line linking Sekondi-Takoradi with Accra and Kumasi.

The Black Star Line, owned by the government, operates a cargo-passenger service to Canada, the US, the UK, Italy, and West Africa. In 2002, Ghana had a merchant shipping fleet comprising 7 vessels and 16,450 GRT. Lake transport service between Akosombo and Yapei is operated by Volta Lake Transport Co.

Ghana has no natural harbors. An artificial deepwater port was built at Sekondi-Takoradi in the 1920s and expanded after World War II. A second deepwater port, at Tema, was opened in 1962, and in 1963 further extensions were made. At a few smaller ports, freight is moved by surfboats and lighters. The major rivers and Lake Volta provide about 1,293 km (803 mi) of navigable waterways.

In 2001, there were 12 airports in Ghana, 7 of which had paved runways. Accra's international airport serves intercontinental as well as local West African traffic. Smaller airports are located at Sekondi-Takoradi, Kumasi, Tamale, and Sunyani. Ghana Airways, owned by the government, operates domestic air services and flights to other African countries and to the Federal Republic of Germany (FRG), London, and Rome. In 2001, 301,100 passengers were carried on scheduled domestic and international flights.