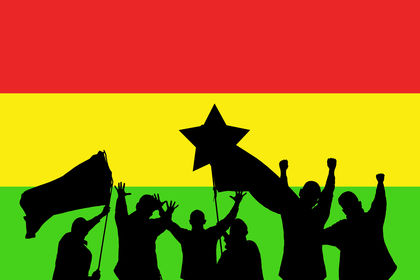 The population of Ghana in 2003 was estimated by the United Nations at 20,922,000, which placed it as number 50 in population among the 193 nations of the world. In that year approximately 3% of the population was over 65 years of age, with another 43% of the population under 15 years of age. There were 99 males for every 100 females in the country in 2003. According to the UN, the annual population growth rate for 2000–2005 is 2.17%, with the projected population for the year 2015 at 26,359,000. The Ghanaian government views the high growth rate as a hindrance to development, because of the pressure put on scarce public resources, employment, and food supplies. Modifying fertility is the primary official means of decreasing population growth. The population density in 2002 was 85 per sq km (220 per sq mi). Approximately 80% of the inhabitants reside in the south or in the far northeast and northwest.

WHY THAT .
I DO NOT THINK
IT IS IMPORTANT.WHAT MATTER MOST, IS TO KNOW THAT WE ARE ONE PEOPLE.
PLEASE I WANT TO KNOW POPULATION IN 1957.
THANKS

Please may i know the number of Ghanaian tribes and their population size?
3
kpo mawufemor

PLEASE I WILL BE VERY GLAD IF YOU CAN HIGHLIGHT ISSUES CONCERNING POPULATION DISTRIBUTION ;TREND GROWTH,COMPONENT OF CHANGE AND ENVIRONMENT DEVELOPMENT NEXUS.
4
Angel

please i want to know the number of our current population and the population growth rate in ghana.
5
WILLIAMS AMEZAH