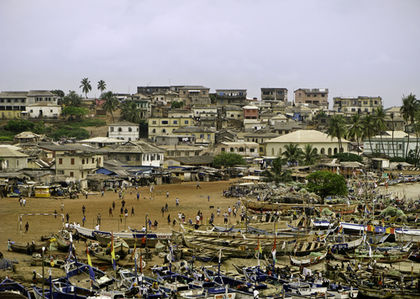 Recent economic policy has aimed at correcting basic problems in every phase of the economy: unemployment (20% in 1997), low productivity, high production costs, the large foreign debt ($5.96 billion in 2001), low savings and investing, inflation (25% in 2001), and high private and government consumption. The country relies heavily on financial assistance from international lenders including the World Bank and the International Monetary Fund (IMF). Conditions of the loans include progress in privatizing state-owned enterprises and achieving macroeconomic performance targets.

The government's recently launched Vision 2020 plan aims at making Ghana a middle-income country through free-market reforms over the course of the next 25 years. Key elements of the plan include increased privatization of parastatals, a more friendly environment for foreign investment, renewed efforts to facilitate private-sector growth, and improvements in infrastructure and social welfare. By 2003, about two-thirds of 300 state-owned enterprises had been sold to private owners. During 1999, Japan announced the donation of $16.5 million to import machinery, spare parts, and industrial materials. The US energy firm CMS announced planned to build a new electric generating unit, alleviating fears of further power outages.

In 2002, Ghana reached decision point on the IMF/World Bank's Heavily Indebted Poor Countries (HIPC) initiative, and was to receive $3.7 billion in debt relief. The relief will allow Ghana to increase spending on education, health, programs to benefit rural areas, and improved governance. Ghana raised electricity, fuel, and municipal water rates, and raised taxes to stabilize its fiscal position, as part of the agreed-upon debt relief plan. In 2003, Ghana negotiated a three-year $258 million Poverty Reduction and Growth Facility (PRGF) Arrangement with the IMF, to support the government's economic reform program for 2003–05.

this really helped me find out stuff about ghana!!
2
Andy

Well i think Ghana is on course to achieve its goals. we have to stay focused,and vigilant.no unnecessary politicization of serious economic issues and most importantly,Gods grace.leaders must also cultivate the political will needed to make drastic and sometimes short-term politically detrimental decisions.long live GH
3
MikeyDrew

I have been waiting for Ghana to emerge for over 30 years, and as it is finally in a place to be an example for developing nations, I only hope it follows its own instincts and not those of Asia, Europe or America. The solutions for Ghana are African. Follow your soul.
4
Apostle James

The government of Ghana has shown an unusual commitment to development unlike most west African states. But I wonder will they be open to civil assistance? We have ideas that could help build the future of the country too.
5
botaghana

To my notes the Ghana government is not doing well,becourse it is not controling the foreign companies and the foreign donners.The problem is they are not helping the social wellfare.They are there to make money not to help build a country,if they realy want to help they may start to build the wellfare of the people.Botaghana is an NGO based Tema,we have members who are working on the Accra-Tema rail line which is yet complited.our members were paid 8gh per day this very low,no safty regulation on the constration site,this is foreign contrator,how is this possible,why are the useing us,where is UN,and other big org,which give donnation to Ghana development project.Bota is crying for help,yes we can.
6
Antwi Collins Asamoah

Ghana can do better than what we are experiencing now. we all believe education is the key to every economy. recent bills in our educational sector is very sad that people have the desire to school but have no means. this is because, education is now for the rich people.
7
yeboah lawrence

I think Ghana will be able to achieve her goals in the next twenty years to come.