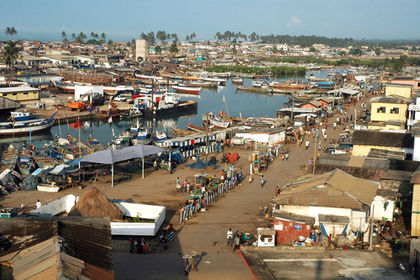 The climate is tropical but relatively mild for the latitude. Climatic differences between various parts of the country are affected by the sun's journey north or south of the equator and the corresponding position of the intertropical convergence zone, the boundary between the moist southwesterly winds and the dry northeasterly winds. Except in the north, there are two rainy seasons, from April through June and from September to November. Squalls occur in the north during March and April, followed by occasional rain until August and September, when the rainfall reaches its peak. Average temperatures range between 21° and 32° C (70–90° F ), with relative humidity between 50% and 80%. Rainfall ranges from 83 to 220 cm (33–87 in) a year.

The harmattan, a dry desert wind, blows from the northeast from December to March, lowering the humidity and causing hot days and cool nights in the north; the effect of this wind is felt in the south during January. In most areas, temperatures are highest in March and lowest in August. Variation between day and night temperatures is relatively small, but greater in the north, especially in January, because of the harmattan. No temperature lower than 10° C (50° F ) has ever been recorded in Ghana.

this was extremely helpful for my homework and i found it really understandable. please put more articles on your site like this i will definetely be recommending it to my friends
2
Djuan

this really helped me on my Ghana report so i hope it will help you too.
5
jordan sangster

this helped us heaps on our tour to ghana :P We are looking forward to our tour :)
7
yasse

This was really helpful , so i would definetly reccomend it to friends and family.
8
Princess

I had to do a essay on Ghana and this really helped me alot and I got an "A" on the essay :)
9
Kathalinlin

Thank u so much for this info! It really helped me in preparing a presentation about Ghana-my country whiles I am in the States.