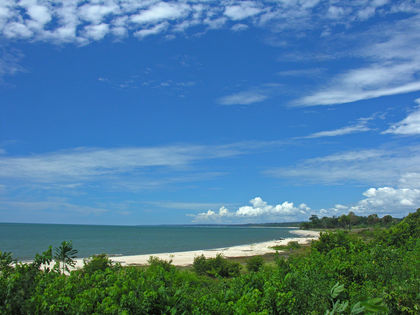 Gabon has the moist, hot climate typical of tropical regions. The hottest month is January, with an average high at Libreville of 31° C (88° F ) and an average low of 23° C (73° F ). Average July temperatures in the capital range between 20° and 28° C (68° and 82° F ). From June to September there is virtually no rain but high humidity; there is occasional rain in December and January. During the remaining months, rainfall is heavy. The excessive rainfall is caused by the condensation of moist air resulting from the meeting, directly off the coast, of the cold Benguela Current from the south and the warm Guinea Current from the north. At Libreville, the average annual rainfall is more than 254 cm (100 in). Farther north on the coast, it is 381 cm (150 in).

with your website info i was able to get an A. thank you
2
Austin

this is a great article it helped me a lot with my speech. thank you so much :]
3
Joe

Thank you for the information, this website has been incredibly helpful.
4
Nikki

Thanks to this website i was able to finish my assignment, thanks for the info. ^.^
5
tanner

This website helped me with my project on making an african mask.
8
phil

Thx it helped me with my french project except now i gotta translate it :b
10
mohammed

This article helped me out a lot on my social studies project thnx so much.
12
Ethan

I found it kinda helpful. I needed it to say the temperature during the wet and dry season.