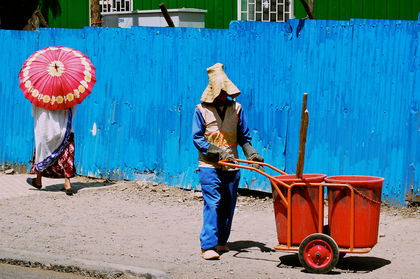 It was estimated by the Population Reference Bureau that 18% of the population lived in urban areas in 2001. The capital city, Addis Ababa, had a population of 2,534,000 in that year. Other urban centers include Dire Dawa, Dese, Harer, Jima, Nazret, and Gonder. Ethiopia's next census is slated for 2004. According to the United Nations, the urban population growth rate for 2000– 2005 was 5.0%.

The prevalence of AIDS/HIV has had a significant impact on the population of Ethiopia. The United Nations estimated that6.5% of adults between the ages of 15–49 were living with HIV/AIDS in 2001. The AIDS epidemic causes higher death and infant mortality rates, and lowers life expectancy. Life expectancy in Ethiopia is 45 years.

This helps a little but you should update it now in the year 2007. It might help people a little better. Those are just some suggestions but feel free to do what you want to. Thank You for your help.

This a wonderful essay. This really helped me on my project. I thank whoever created this essay! My name is Lamarra and I am 13 yrs. old.
3
Bob

Very good information and help me of alot thankyou very much.
4
unknown

helped me alot thanx so much

Please update your information. The HIV prevelance rate in Ethiopia is 1.4% of those 15 to 55
9
Alex Saul

Really helpfull for my leaflet about ethiopia good for my page about population.
10
famalam

Hiyaa thank you, really good information thank you it has helped me do my science project
12
Gamil

Hey thanks whoever write this article it helps me alot because I' m doing porject about underage marriage in Ethiopia an the uk, so this artcle helps me about hw ppl suffering from AID or HIV. THANKS AGAIN. I WOULD BE HAPPY IF U SEND TO ME ANOTHER ARTCLE ABT ETHIOPIA PLS.
14
sebneto