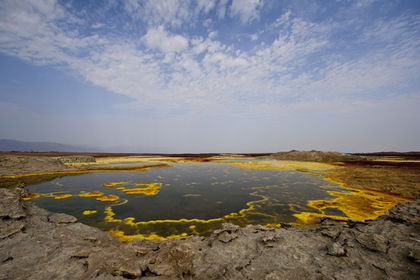 The most famous Ethiopian in national legend is Menelik I, the son of the Queen of Sheba and King Solomon, regarded as the founder of the Aksumite Empire. This tradition is contained in the Kebra Negast , or Book of the Glory of Kings. The most famous Christian saint of Ethiopia is Frumentius of Tyre (b.Phoenicia, d.380?), the founder of the Ethiopian Church. The 15th-century composer Yared established the Deggua, or liturgical music, of the Ethiopian Church. A 13th-century monarch, Lalibela, is renowned for the construction of the great monolithic churches of Lasta (now called Lalibela). Emperor Amda-Seyon I (r.1313–44) reestablished suzerainty over the Muslim kingdoms of the coastal lowland regions. During the reign of King Zar' a-Ya'qob (1434–68), a ruler renowned for his excellent administration and deep religious faith, Ethiopian literature attained its greatest heights. Emperor Menelik II (1844–1913) is considered the founder of modern Ethiopia. Emperor Haile Selassie I (1891–1975) was noted for his statesmanship and his introduction of many political, economic, and social reforms. Lt. Col. Mengistu Haile Mariam (b.1937) led the 1974 coup and was head of state from 1977 to 1991.

who else is famous from ethiopia. i would like to know more names
4
nayah

i need to do a topic of famous people from Ethiopia for a school project... help ?
7
anounymous

thanks it helped alot with school projects, this is in my favorites.
8
Evie

i am doing a country and i need some advice about famous people in Ethiopia!
9
Josefina

I am Doing a country report on Ethiopia. I need to research on famous people of Ethiopia.
10
Bo rock

as i am an ethiopian and as i know through my life ethiopia is a beuty country.