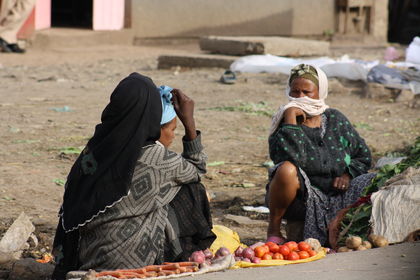 Ethiopia is a composite of more than 70 ethnic groups. The Oromo (Galla) group represents approximately 40% of the population and is concentrated primarily in the southern half of the nation. The Amhara and Tigrean groups constitute approximately 32% of the population and have traditionally been dominant politically. The Sidamo of the southern foothills and savanna regions account for 9%, while the Shankella make up about 6% of the population and reside on the western frontier. The Somali (6%) and Afar (4%) inhabit the arid regions of the east and southeast. Nilotic peoples live in the west and southwest along the Sudan border. The Gurage account for 2% of the population; the remaining 1% is made up of other groups. The Falasha (who call themselves Beta Israel, and are popularly known as "black Jews") live in the mountains of Simen; they were reportedly the victims of economic discrimination before the 1974 revolution and of religious and cultural persecution after that time. Some 14,000 were secretly flown to Israel via the Sudan in 1984–85. About 14,000 more were flown out of Addis Ababa in 1991. Another 4,500 are believed to remain. The Beja of the northernmost region, the Agau of the central plateaus, and the Sidamo of the southern foothills and savanna regions are the remnants of the earliest known groups to have occupied Ethiopia.

This article is very helpful and very useful. This is so easy a caveman can do it.
2
Courtney

See, I am doing this project about Ethiopia and well this site really helped me!! Just want 2 give u props on dat!! -6th Grader
3
nardos

Thanks a lot for info about my country. It helped me finish my civic assign.
And props on making it short and precise.

Precise and to the point. Thanks for writing this, I have been looking everywhere for ethnic population percentages.
Woot!
5
Fre

I was looking everywhere for ethnic percentages for the ethnic section in my research paper on Ethiopia. This cite just might get me an A in world studies!
7
mohammed

i got the answer ,that i was looking for .. proud be an Ethiopian and part of one Ethnicity.
8
amir

Thank you. This info really helped me with the info I needed to know. Again thank you
10
fith

It sure can help 6th graders or less. It is the least researched written material I ever seen. Thanks for nothing and putting this much info on nationsencylopedia O_O
11
Mikael

This information is short and so much important .10Q so much
12
Kelsey

I found this very helpful! I'm only in 6th grade and my really boring social studies teacher asssigned me Ethiopia for my project, when I asked her about the ethnic groups all she said was "look in a book" but there was nothing!! I like how this was short and simple!
13
pastebet

Thanks Meklit for pointing the misuse of the word. it's very offensive to call Oromos "Galla". please make a correction on the statement. I think a person who has a wisdom do not use or say that kind of word to describe an ethnic group now a days.
14
zemecha

do not say sidamo there is no such name in thiopia it is the mis naming of the people of sidama instead say sidama for ever ok!
15
Ash

Thanks! this really helped. I'm also doing a project on Ethiopia.
16
Grage David

I don't know any people represented "Galla". I think it is the feudal word.
17
dzzie

Thanks so much for taking the time to write this, you just saved me form failing my writing class!
19
Rawr

Thanks for this info! It helped me on a world history assignment!
20
Ogadeni

This really helped me for my groups wrriting class project 8th grade.
22
Hannah

THX! It's nice to know there are some websites that focus on ethnic groups of Ethiopia.
Also Ogadeni The Amhara population is larger than the somali population.
23
Fikru

How the hell you use the word GALLA, which oromo people ain't accept it, rather as insult.
You cannot use the word GALLA as interchangeable name of Oromo.
And thanks for the rest of information you have provide.
24
Tesfaye

This information, including the naming of the ethic group is incorrect. i am from that country and I can assure you this information cannot be used for any personal or corporate (research) purposes. In addition some of the used names are obsolete, derogatory and insulting and should be removed from the web.
25
Tadele Benti

There is no ethnic group called 'Galla' and 'Shankella' in Ethiopia as well as in the rest of the world. The so-called 'Solomonic Dynasty' used to use these words to humiliate, undermine and discourage some ethnic groups. Hence, I kindly request you to remove these hateful and derogatory terms from your article. Thank you!