Although numerous archaeological discoveries indicate a very early Sangoan (modified Acheulean) culture throughout Equatorial Guinea, the earliest traceable inhabitants were Pygmies, remnants of whom remain in northeastern Río Muni. Bioko was apparently uninhabited when the Bubi came by sea from the mainland in the 13th century. Río Muni seems to have been occupied by the Bantu in a series of waves that superseded the Pygmies—first by the Bubi, before 1200; then by the Benga, Bujeba, and Combe, perhaps about 1300; and, finally, by the Fang from the Congo Basin, after 1687. Although Annobón was uninhabited in 1471 when the Portuguese discovered it, it was the only one of the territories later incorporated into Equatorial Guinea that they attempted to develop. The proprietorship of Annobón was ill administered, however, and it was virtually self-governing for 250 years. In 1778, Portugal transferred its nominal claims over Annobón, Fernando Póo, and the entire coast from the Niger Delta to Cape López (in modern Gabon) to Spain, in return for Spain's renunciation of pirate claims in southern Brazil. Later that year, a Spanish expedition of occupation arrived from South America. The expedition withdrew in 1781 after disease and poor administration had cost the lives of 370 of the 547 Spaniards.

The primary Spanish mainland explorations were undertaken between 1875 and 1885. Catholic missionary efforts by the Claretians extended Spanish influence to Annobón (1884), completed the exploration of Fernando Póo (1883–1924), and began the penetration of Río Muni (1886–1925). The first effective efforts to penetrate the interior were undertaken in 1926–27 by Governor Ángel Barrera, who reportedly employed considerable force to subjugate the Fang. The administrative procedure for the colony was defined as the process of reducción (conquest), repartimiento (resettlement), and encomienda (placing in trust) of the indigenous people—the policy followed in Mexico and Peru 400 years earlier—but this time, the people were encomendado (entrusted) not to private masters but to the Claretians. After World War II, the Franco government initiated a policy of heavy investment to turn Spanish Guinea into a model colony.

Spanish Guinea became a province of Spain in 1958. In 1964, two provinces (Fernando Póo and Río Muni) were created under an autonomous regional government. Political opposition and Protestant missions, both banned in Spain, were tolerated, and the regional regime of Bonifacio Ondó Edú was virtually self-governing internally. In 1966, independence was promised. Two years later, an opposition faction under Francisco Macías 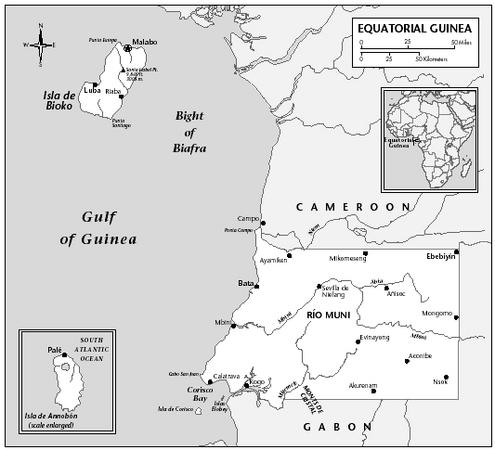 Nguema won the preindependence elections and organized a sovereign government on 12 October 1968, when the colony became the independent Republic of Equatorial Guinea. Within six months, hostility between Riomunians and Fernandinos had sharpened. The continued presence of Spanish civil servants, troops, and ships and the unchanged influence of Spanish plantation management provoked a crisis in 1969. Two coups failed, the Spanish were evacuated, medical services were suspended (until WHO restaffed them), and fiscal transactions ceased. However, within six weeks a new understanding was reached with Spain, under UN auspices, and Spanish subsidies were restored.

On 23 August 1972, Francisco Macías Nguema was proclaimed president for life; subsequently he assumed ministerial posts of defense, foreign affairs, and trade. An exile group, the Equatorial Guinean Liberation Front, and others charged in December 1974 that more than two-thirds of the National Assembly elected in 1968 had disappeared, and that many prominent persons, especially political opponents of the president, had been assassinated. It was estimated that a quarter of the country's population was in exile in Cameroon, Gabon, and Europe. On 3 August 1979, Macías Nguema was overthrown in a military coup led by his Spanish-trained nephew, Lt.-Col. Teodoro Obiang Nguema Mbasogo; the former president was tried shortly after the coup and executed on 29 September. International human rights organizations estimated that during his 11-year rule at least 50,000 people had been killed and 40,000 had been enslaved on state-owned plantations.

Under Obiang's leadership, the Supreme Military Council became the highest power in the country. The country continued to decay as corruption flourished and political opponents and others were imprisoned or put to death. Soviet influence was reduced, and economic and military cooperation with Spain was restored. A new constitution, approved in a referendum on 15 August 1982, provided that Obiang would remain head of state until 1989, when direct popular elections would take place. Parliamentary elections (based on a single list, with no political parties permitted) were held on 28 August 1983, and the PDGE won all 41 seats in the Chamber of People's Representatives in 10 July 1988 elections. Obiang was elected without opposition on 25 June 1989.

On 17 November 1991, a new constitution was adopted. Opposition parties began to be organized and sought official recognition in 1992. Eventually an election was held on 21 November 1993 and the PDGE won 68 of 80 seats. But the major opposition parties boycotted the election and as many as 80% of the eligible voters refused to participate. The new cabinet was expanded from 34 to 42 members. On 25 February 1996, Obiang was reelected to the presidency for another 7-year term, receiving 98% of the vote. The poll was declared farcical by foreign observers. Despite a boycott of the elections by the three main opposition parties, voter turnout was 86%. Obiang's plan to form a government of national unity failed due to refusal of the opposition, because their conditions for participation had not been met.

New wealth from substantial oil and gas reserves discovered off the coast in 1996 boosted the tiny country's impoverished economy, but the wealth did not reach the poor. Government corruption and mismanagement were rampant and some 80% of the wealth was amassed by less than 5% of the population, mostly Obiang's family clan. Growing discontent resulted in at least two coups d'état (the government attributed one in May 1997 to opposition Progress Party leader, Severo Moto) and a rebellion on Bioko Island by members of the disenfranchised Bubi ethnic group in January 1998. A military court sentenced 15 of the 215 Bubi activists to death. In September Obiang suspended the sentence, under international pressure.

The ruling PDGE won 65 of the 80 seats in the second multiparty parliamentary elections held on 7 March 1999. In July 1999, the Prime Minister, Angel Serafin Seriche Dougan, and his government resigned, apparently to pave way for a government of national unity. The president offered to give a cabinet position to each of the opposition parties. Second multi-party legislative elections were held on 7 March 1999. Mainstream opposition parties participated in the elections, but along with the international community, denounced the elections for serious irregularities. The ruling PDGE again won 75 seats. The Convergence for a Social Democracy (CPDS) and the People's Union (UP) respectively got one and four seats.

In elections held 15 December 2002 Obiang officially was reelected with 97.1% to 2.2% of the vote for Celestino Bonifacio Bacale, but as in the past, the elections were marred by fraud, and held little credibility either domestically or abroad.

The judiciary, which often has come under international scrutiny, scheduled a national conference in January 2003 to seek ways to improve human rights and to strengthen rule of law following criticism by rights groups, the opposition, and the Spanish government of the sentencing of 68 opposition activists for between six and 20 years in jail on charges of plotting to overthrow the president. Also in January 2003, Equatorial Guinea sent a contingent of soldiers to Central African Republic as part of the Economic and Monetary Community of Central African States' (CEMAC) peacekeeping force in the region.