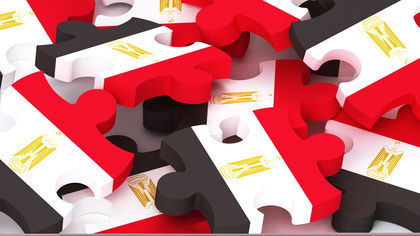 Since the founding of the republic in 1953, the president and his army colleagues have dominated Egyptian politics. The Arab Socialist Union (ASU; founded by President Nasser as the Egyptian National Union in 1957) was the sole legal political party until 1976, when President Sadat allowed three minor parties to participate in parliamentary elections. In 1978, Sadat replaced the ASU with his own organization, the National Democratic Party (NDP), of which he became chairman. In elections held in June 1979, the NDP won 342 seats in the People's Assembly; the Socialist Labor Party (SLP), 29 seats; the Liberal Socialist Party, 3; and independents, 8. In 1980, however, Sadat denounced the SLP as the "agent of a foreign power," and 13 of the party's deputies defected either to join the NDP or to become independent members of the legislature, thus reducing the number of SLP seats to 16.

In January 1982, President Mubarak was elected without opposition as chairman of the NDP. In elections held in May 1984, the NDP won 390 seats in the National Assembly. The New Wafd (Delegation) Party, the middle class successor of the dominant party of the pre-Nasser period allied with the Muslim Brotherhood, won 58. In the 1987 Assembly elections, the ruling NDP again won about 70% of the vote. Seventeen percent voted for an alliance of Socialist Labor, Liberal Socialist and, under their banner (religious parties are banned), the Muslim Brotherhood; 11% voted for the New Wafd. Elections in 1990 drew only some 25% of eligible voters when the opposition boycotted the poll, charging unfair and undemocratic procedures.

In 1995, the opposition contested the elections, but to little effect. Balloting was held on 29 November and the NDP won a huge majority (317) of the body's 444 seats. Although independents won more than 100 seats, they are so closely allied with the NDP that nearly all of them joined the party after the elections. The New Wafd Party won 6 seats; the National Progressive Unionist Party won 5; the Socialists won 1; and the Nasserists won 1.

Since the beginning of a campaign of terror against tourists and Egypt's Coptic minority, the government has clamped down on Islamist parties, notably the Muslim Brotherhood, which had always been technically illegal. The Mubarak regime has resorted to strict authoritarian measures and by 1999, held 20,000 suspected Islamic militants in prison. In September 1999, President Mubarak, running unopposed, was elected to a fourth six-year term in office.