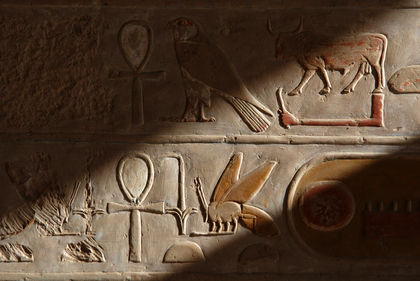 The language of most of the population is Arabic, a Semitic tongue; the 1971 constitution declares Arabic to be Egypt's official language. Dialects vary from region to region and even from town to town. English and French are spoken by most educated Egyptians and by shopkeepers and others. The ancient language of Pharaonic Egypt, a Hamitic tongue, survives vestigially in the liturgy of the Copts, a sizable Christian sect dating back to the 5th century AD . The Nubians of Upper Egypt speak at least seven dialects of their own unwritten language. There are a small number of Berber-speaking villagers in the western oases.

i liked your report on the egypt languages.
it helped me alot.
thank you.
2
Krystallyss

Thank you for your encyclopedia! a very good tool, with a lot of information explained with easy words :)
3
Fiona

Thank you for your information you really helped me with my projact!
6
rachel

HEHE lol I used my full name instead of my first name. XD

This helped with my social studies culture project thingy.
8
mya

Helped me alot thanks.Now I can get a great mark on my french Geography project

It helped me on my project
Thx a lot .now I can get a awesome mark