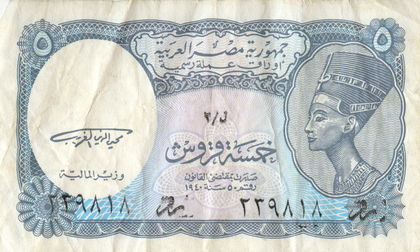 At the time of the 1952 revolution, Egypt presented the familiar picture of a dual economy, having a small modern sector developed within a tradition-bound society. A rapidly expanding population was pressing hard on limited agricultural resources; there were severe problems of poverty, unemployment, unequal distribution of income and wealth, disease, political corruption, and illiteracy. Rapid industrialization was viewed as essential to economic improvement. The revolution was both a national revolution, Egyptianizing the economy by ridding it of foreign influence, and a social revolution, developing a "democratic, cooperative, socialist" society. The promised "socialism" was not at that time doctrinaire; it was pragmatically selective in its application. A major objective was the diversion of private investment from land into industry. In this earlier period, industrialization also was fostered through government creation and expansion of industrial firms.

In July 1961, in a major policy shift, socialist decrees brought virtually all economic activity under government ownership or control. The Charter for National Action, which elaborated the philosophy of Arab socialism, was approved by the National Congress of Popular Forces on 1 July 1962. It is clear that the Egyptian government had decided that industrialization and improvement of living standards could come only through central planning and direct government ownership and control of virtually the entire system of production and foreign trade.

Egypt inaugurated its first five-year development program in 1960. By the end of 1965, national income had increased in the five-year period by 39.6%; 171,000 new jobs had been created; and wages and salaries had increased by 54%. A second five-year development plan (1966–70) was canceled in 1967 because of the Arab-Israeli war, and annual plans were instituted. Shortly after the 1973 war, President Sadat introduced an "open door" economic development program that confirmed Egypt's socialist policy but decentralized decision making in the public sector, removed government constraints on the private sector, and attracted foreign private capital by liberalizing financial and trade regulations. As a result, most public-sector industries developed rapidly during the 1973–79 period. A five-year development plan (1980–84) was replaced in 1982 by the new plan for 1982–87, of which the public sector was allocated 76.5% of the total funds. Of fixed investments in development projects, the industrial and mining sector was to receive 26%, transport and communications 16%, agriculture 12%, housing 11%, and electric power 8%. By 1987/88–1991/92 investment allocation for the public sector dropped to 62% and to 42% in the 1992/93–1996/97 plan. It aimed at the privatization of several sectors by encouraging the private sector to invest more capital. Egypt at the end of the 1990s was able to attract more foreign investment, cut the inflation rate, and decrease budget deficits.

As of the early 2000s, the state still controlled virtually all heavy industry, although agriculture was in private hands, and has been deregulated, with the exception of the cotton and sugar sectors. This and other efforts at privatization have increased the growth of the economy. The 1997 terrorist attacks at Luxor, and the 11 September 2001 terrorist attacks on the United States negatively impacted the economy, and particularly the tourism sector. At the end of 2000–01, total public debt amounted to 64% of gross domestic product (GDP), and foreign public debt amounted to about 26% of GDP. A general sales tax was extended to the wholesale and retail levels of business in 2001. Increased spending on infrastructure projects in the early 2000s widened budget deficits once more. In 2003, after a series of currency devaluations, Egypt adopted a floating exchange rate mechanism—the Egyptian pound was no longer pegged to the dollar.

you can also write about rivers in this.
specially of nile for more information about egypt and nile
2
Mahela Abey

Its a good source. But you should focus more on the current situation, as in even MUN researches we have to talk and debate on the present