Structural reforms instituted in the early 1990s have helped Egypt to slowly take care of its debt. Total outstanding debt stood at $29 billion in 2001, down from $30 billion in 1997. However, Egypt's annual trade deficit has increased steadily during the late 1990s and early 2000s.

The government has attempted in recent years to improve the balance of payments situation through monetary and foreign exchange policies that have kept interest rates high and made access to credit and foreign exchange for imports difficult. These policies, while improving the balance of payments situation, have had an overall negative impact on economic growth and the country's ability to encourage foreign investment.

The US Central Intelligence Agency (CIA) reports that in 2001 the purchasing power parity of Egypt's exports was $7.1 billion while imports totaled $164 billion resulting in a trade deficit of $156.9 billion.

The International Monetary Fund (IMF) reports that in 2001 Egypt had exports of goods totaling $7.03 billion and imports totaling $13.7 billion. The services credit totaled $9.04 billion and debit $7.04 billion. The following table summarizes Egypt's balance of payments as reported by the IMF for 2001 in millions of US dollars. 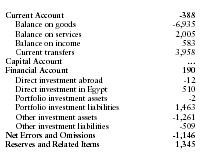