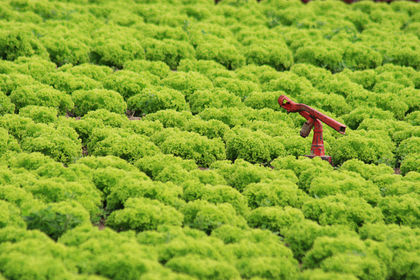 During the 1970s, despite substantial investment in land reclamation, agriculture lost its position as the dominant economic sector. Agricultural exports, which accounted for 87% of all merchandise export value in 1960, fell to 35% in 1974 and to 11% by 2001. In 2000, agriculture accounted for 17% of GDP and 34% of employment.

Cotton has been the staple crop, but it is no longer important as an export. Production in 1999 was 243,000 tons. Egypt is also a substantial producer of wheat, corn, sugarcane, fruit and vegetables, fodder, and rice; substantial quantities of wheat are also imported despite increases in yield since 1970, and significant quantities of rice are exported. Citrus, dates, and grapes are the principal fruits by acreage. Agricultural output in tons in 1999 included corn, 9,350,000; wheat, 6,347,000; rice, 5,816,000; potatoes, 1,900,000; and oranges, 1,525,000. The government exercises a substantial degree of control over agriculture, not only to ensure the best use of irrigation water but also to limit the planting of cotton in favor of food grains. However, the government's ability to achieve this objective is limited by crop rotational constraints.

Egypt's arable area totals about 3.3 million hectares (8.1 million acres), about one-quarter of which is land reclaimed from the desert. However, the reclaimed lands only add 7% to the total value of agricultural production. Even though only 3% of the land is arable, it is extremely productive and can be cropped two or even three times per year. Most land is cropped at least twice a year, but agricultural productivity is limited by salinity, which afflicts an estimated 35% of cultivated land, and drainage problems.

Irrigation plays a major role in a country the very livelihood of which depends upon a single river. Most ambitious of all the irrigation projects is that of the Aswan High Dam, completed in 1971. A report published in March 1975 by the National Council for Production and Economic Affairs indicated that the dam had proved successful in controlling floodwaters and ensuring continuous water supplies, but that water consumption had been excessive and would have to be controlled. Some valuable land was lost below the dam because the flow of Nile silt was stopped, and increased salinity remains a problem. Further, five years of drought in the Ethiopian highlands—the source of the Nile River's water—caused the water level of Lake Nasser, the Aswan High Dam's reservoir, to drop to the lowest level ever in 1987. In 1996, however, the level of water behind the High Dam and in Lake Nasser reached the highest level since the completion of the dam. Despite this unusual abundance of water supply, Egypt can only utilize 55.5 billion cu m (1.96 trillion cu ft) annually, according to the Nile Basin Agreement signed in 1959 between Egypt and Sudan. Another spectacular project designed to address the water scarcity problem is the New Valley (the "second Nile"), aimed at development of the large artesian water supplies underlying the oases of the Western Desert. Total investment in agriculture and land reclamation for the government's Third Plan (1993–1997) was E £16,963 million.

The agrarian reform law of 1952 provided that no one might hold more than 190 feddans for farming and that each landholder must either farm the land himself or rent it under specified conditions. Up to 95 additional feddans might be held if the owner had children, and additional land had to be sold to the government. In 1961, the upper limit of landholding was reduced to 100 feddans, and no person was allowed to lease more than 50 feddans (1 feddan = 0.42 hectares). Compensation to the former owners was in bonds bearing a low rate of interest, redeemable within 40 years. A law enacted in 1969 reduced landholdings by one person to 50 feddans. By the mid-1980s, 90% of all land titles were for holdings of less than five feddans, and about 300,000 families, or 8% of the rural population, had received land under the agrarian reform program. According to a 1990 agricultural census, there were some three million small land holdings, almost 96% of which were under five feddans (2.1 hectares/5.2 acres). Since the late 1980s, many reforms attempting to deregulate agriculture by liberalizing input and output prices and by eliminating crop area controls have been initiated. As a result, the gap between world and domestic prices for Egyptian agricultural commodities has been closed.

I completely agree! Excellent and comprehensive data in one place makes learning about a country easier than I thought :)
3
Anna

Great advice ! This has tought me alot. I will most deffianlly recommend this to orther people so it can help them out also !
4
David George

"Since the late 1980s, many reforms attempting to deregulate agriculture by liberalizing input and output prices and by eliminating crop area controls have been initiated. As a result, the gap between world and domestic prices for Egyptian agricultural commodities has been closed."

It is so cool to learn about stuff we r learning in school!!
6
Shahat Elmorshdy

Yes that is good but not correct , Egypt had many problem because the last Gov., is so bad ant it is but many bad Agriculyuarl policies , sorry because they supportted the importer more than farmers
7
Colleen

This is a very good site i was able to do my history project with no problem with the help of this website!