Somali (Issa) and Afar herders, nomadic, Muslim and Cushiticspeaking, lived in and around Djibouti for hundreds of years before European explorers in the 19th century brought the region to the attention of the modern West. Obock and, later, Djibouti city were recognized as ports of great usefulness on the sea routes to India, Mauritius, and Madagascar. The Italians and British were active colonizers farther south along the Somali coast, and Britain was gaining control in what are now Yemen, the Sudan, and Egypt. France decided to establish its colonial foothold in 1862 along what is now the northeastern coast of Djibouti. This tentative venture became in 1884–85 the protectorates of Obock and Tadjoura, which were merged to form French Somaliland.

The administrative capital of French Somaliland was moved from Obock to Djibouti in 1896, a year before the boundaries of the colony were officially demarcated between France and Ethiopia. In 1898, a French consortium began building the narrow-gauge railway that finally reached Addis Ababa in 1917. During the Italian invasion and occupation of Ethiopia in the 1930s and during the early part of World War II, there were constant border skirmishes between French and Italian forces. In December 1942, French Somaliland forces joined the Free French under Gen. Charles de Gaulle.

After World War II, French Somaliland gradually gained a measure of local autonomy. In 1957, it obtained a territorial assembly and a local executive council to advise the French-appointed governor-general. The following year, the voters of French Somaliland opted to join the French Community as an overseas territory, electing one deputy and one senator to the French National Assembly. In late 1958, the first elections to the local assembly were held under a system of proportional representation. In the second elections, held in 1963, plurality voting based on party lists in seven districts replaced proportional voting. The result was the election of an Afar leader as head of the executive council; the more numerous Issas felt they had been prevented by the new electoral procedures from gaining control of the council. In 1967, 60% of the voters in a special referendum opted to retain the colony's association with France, but the Issas again complained that the franchise lists had been unfairly restricted in a way that favored the Afars. After the referendum, French Somaliland became known as the Territory of the Afars and the Issas.

The country's independence movement had been led throughout the postwar period by the Issas, but their movement 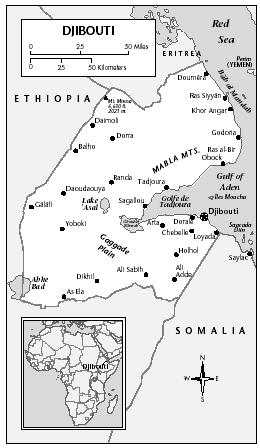 had been opposed by Ethiopia (which wanted French control to continue) and by the Afars, who feared Issa domination. Finally, in 1975, the French began to accommodate increasingly strident demands for independence. The territory's citizenship law, which had favored the Afar minority, was revised to admit more Issas. In a referendum in May 1977, the now-enlarged Issa majority voted decisively for independence, which was officially established on 27 June 1977, as the country officially became the Republic of Djibouti. Hassan Gouled Aptidon, the territory's premier, had been elected the nation's first president by the territorial Chamber of Deputies three days earlier. Although Gouled, an Issa, appointed Afar premiers and the cabinet was roughly balanced, the dominance of the Issas in administration led to political conflict, including cabinet crises. Gouled was reelected without opposition by universal suffrage in June 1981 and April 1987. A one-party Chamber of Deputies list, elected without opposition in May 1982, consisted of 26 Issas, 23 Afars, and 16 Arabs. Only 12 seats were won by newcomers in the April 1987 election of a one-party list.

A new constitution was voted on in 1992, although the vote was boycotted by opposition parties. In December, legislative elections were held, which, according to the constitution, were to have been open to all parties. Due to administrative restrictions and opposition resolve not to participate, by election time only two parties had been officially allowed to contest seats: the ruling People's Progress Assembly (RPP) and the newly formed Democratic Renewal Party (PRD). Due to the anti-democratic nature of the electoral process, more than half the electorate refused to vote. The RPP was said to have won all 65 seats.

Presidential elections were held in March 1993. Five candidates contested the elections for president. The leader of the PDR, Mohamed Elabe, was Gouled's main opponent. But, again, fewer than half the electorate voted, and Gouled was reelected with officially 60% of the vote.

Dissatisfaction with Gouled grew in the late 1980s and contributed to an uprising by Afar guerrillas of the Front for the Restoration of Unity and Democracy (FRUD) in late 1991. FRUD gained control of some areas of the north and west. In February 1992, France deployed forces in Djibouti, and the Afars declared unilaterally a cease-fire. Yet, fighting continued and a government counteroffensive checked the FRUD by July. Rebel bases in the north were occupied, and many opposition leaders were imprisoned, including Ali Aref Bourhan, for an alleged coup attempt. He was released in December 1993. By the end of 1993, about 35% of the central government's budgetary expenditures went toward maintaining "security"; that is, the military occupation of the north by troops of Somali origin.

In 1993, the FRUD suffered severe losses to a government offensive. In 1994, its leadership split over the issue of negotiations with the government. A more moderate wing then entered into negotiations and called a cease-fire. In March 1995, in compliance with the peace accords signed in December 1994, the majority of the FRUD disarmed, and the military integrated a segment of the insurgents into its ranks. Two FRUD leaders accepted ministerial posts. In March 1996 the FRUD was given legal recognition as a political party. A radical wing of the FRUD, (FRUD-Renaissance) led by Ahmed Dini, remains opposed to the cease-fire. Djibouti and Ethiopia jointly attacked the FRUD rebels in October 1997, and skirmishes continued in 1998.

The human-rights record of the authoritarian Gouled regime came increasingly under attack in the late-1980s and 90s, with allegations of beatings, rapes, arbitrary, prolonged, and incommunicado detentions, extra-judicial killings and disappearances of political/ethnic opponents of Gouled, and union leaders. Journalists have also been harassed, intimidated, and detained.

Gouled became ill in December 1995 and spent several months in hospital in France. During this period there appeared a succession struggle between Ismael Omar Guelleh and Ismael Godi Hared, both close advisors of the president. In part to cut down on inter-party fighting, Gouled elected to remain at the helm after his convalescence. In February 1999 he announced his intention to retire and that he would not be a candidate for the scheduled April 1999 elections. At that point the RPP named Guelleh as its candidate. The FRUD, in alliance with the RPP, accepted Guelleh as its candidate, as well. An opposition coalition, which included the PRD (Democratic Renewal Party), the PND (National Democratic Party), and (unofficially) the FRUD-Renaissance slated Moussa Ahmed Idriss as their candidate. An estimated 60% of the electorate participated, with Guelleh garnering 74% of the votes cast to 26% for Idriss. There was no official boycott of the elections, for the first time since Djibouti's independence from France in 1977. In January 2003, an RPP-led coalition won all 65 seats in the National Assembly.

The election of Guelleh, a key advisor and chief of staff to the former president for over 20 years, coupled with the landslide parliamentary victory of the RPP, signals little change in the status quo. The Issas with the President's sub-clan, the Issa Mamassans, continue to wield disproportionate political and economic influence, and the opposition's accusations of elections fraud have fallen on deaf ears. In early 2003, a US State Department report cited evidence of on-going human rights abuses by the government, but given US interest in Djibouti as a strategic ally in the Middle East and for the war on terrorism, donors were unlikely to apply strong pressure for reforms. There is no independent electoral commission.