Since independence, Djibouti has run large trade deficits, which have been offset by surpluses on services and by transfers attributable to the French base, port receipts, the national airline, the national airport, and grants from donors.

The US Central Intelligence Agency (CIA) reports that in 1999 the purchasing power parity of Djibouti's exports was $260 million while imports totaled $440 million resulting in a trade deficit of $180 million.

The International Monetary Fund (IMF) reports that in 1995 Djibouti had exports of goods totaling $34 million and imports totaling $205 million. The services credit totaled $151 million and debit $87 million. The following table summarizes Djibouti's balance of payments as reported by the IMF for 1995 in millions of US dollars. 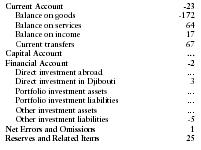