Congo, Republic of the (ROC) - History

Although little is known of the early history of the Congo, it has been established that there was a Congo Empire that extended 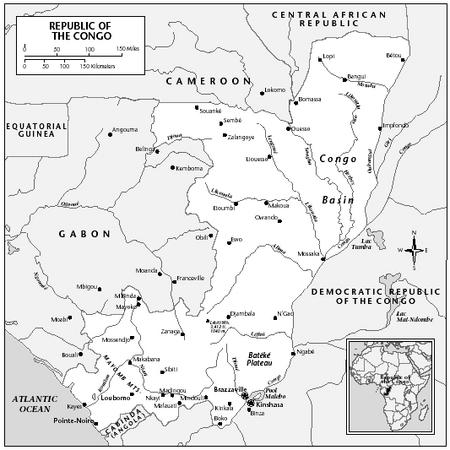 into present-day Angola and reached its height in the 16th century. The kingdom of Loango, which broke away from the Congo Empire, also prospered for a time. Another African state mentioned in the accounts of the first European explorers was the Anzico kingdom of the Teke. By the end of the 17th century, however, all these kingdoms had grown weak.

The coastal regions of the area were known to Portuguese sailors as early as the 15th century. The mouth of the Zaire River was discovered by Diogo Cão in 1484. French trading companies, interested in slaves and ivory, appeared on the scene during the 17th century; by 1785, more than 100 French ships annually sailed up the coast. After the French Revolution, however, French interest in the area waned.

With the abolition of the slave trade, merchants began to seek new sources of commerce. The first forays into the interior began at this time, but extensive exploration came only toward the end of the 19th century, with Pierre Savorgnan de Bràzza and Henry Morton Stanley. In 1880, Bràzza signed a treaty with the powerful Teke tribal ruler Makoko, bringing the right bank of the Zaire River under French control. The Congress of Berlin (1885) gave formal recognition to French claims to the region. The period after 1900 was marked by a slow but steady establishment of French administrative machinery. By 1910, Gabon, Middle Congo, and Ubangi-Shari (including Chad) were constituted administratively as colonies; together they constituted French Equatorial Africa, all under a governor general at Brazzaville. In 1940, French Equatorial Africa joined the Free French movement and the Allied war effort against the Axis powers. The first territorial assembly was elected in 1947. In a referendum held on 28 September 1958, the territory of Middle Congo voted to become an autonomous republic within the French Community.

The Territorial Assembly of the Middle Congo proclaimed the Republic of the Congo on 28 November 1958. On 8 December, Fulbert Youlou, mayor of Brazzaville and leader of the Democratic Union for the Defense of African Interests (UDDIA), was elected to head the provisional government. The adoption of a constitution on 20 February 1959 transformed the provisional government into the first official government of the republic. Legislative elections were held that June. The new National Assembly elected Fulbert Youlou prime minister on 27 June and president on 21 November.

The constitutional law of 4 June 1960, adopted by the French Parliament and by the Senate of the French Community, made it possible for a member state to become independent without leaving the community. The Republic of the Congo thus proclaimed its independence on 15 August 1960. President Youlou resigned on 15 August 1963, in the wake of antigovernment rioting that threatened to turn into civil war. Alphonse Massamba-Debat became provisional president and was formally elected to the presidency on 19 December 1963; a new constitution was approved by national referendum that same month. In 1964, Massamba-Debat established relations with the USSR and China, and then announced the establishment of a "scientific Socialist state" with one-party control.

On 4 September 1968, Massamba-Debat resigned following a military coup that deprived him of most of his presidential powers. Capt. Marien Ngouabi then established a new revolutionary regime. Ngouabi was named president on 1 January 1969, and he proclaimed the People's Republic of the Congo the following December. Political stability proved difficult to achieve, however, and there were seven coup attempts during his seven years in office, which ended with his assassination on 18 March 1977. He was succeeded by Col. Joachim Yhombi-Opango, who abrogated the 24 June 1973 constitution. Yhombi-Opango resigned on 5 February 1979 and was succeeded in March by Col. Denis Sassou-Nguesso. A 20-year treaty of friendship and cooperation with the USSR was signed in 1981. Sassou-Nguesso was reelected president in July 1984 and was chairman of the OAU during 1986–87.

In 1990, a conference of the ruling party agreed to abandon its Marxist ideology. A four-month-long National Conference in 1991 led to the appointment of an interim government, pending elections, and Sassou-Nguesso was stripped of his powers, except for ceremonial tasks. André Milongo headed the interim government, which conducted free elections in 1992. A multiparty government with Pascal Lissouba as president was elected. His coalition, known as the Presidential Tendency, experienced much turbulence in 1993. A changing coalition of opposition parties, strikes, and violent civil unrest threatened the regime. First-round legislative elections on 2 May 1993, gave way to armed conflict in June and July. Also, the Supreme Court ruled that the second-round elections were flawed. To avoid a civil war, the Organization of African Unity and the President of Gabon brokered an accord that accepted first-round results and called for second-round elections on 6 October. The opposition alliance, the Union for Democratic Renewal-Congolese Workers' Party (URD-PCT), won seven of the 11 seats contested. Still, Lissouba's Pan-African Union for Social Democracy and its coalition partners won 69 of the 125 seats and Lissouba's shaky presidency continued. However, fighting broke out again in the capital in November 1993, continuing into 1994 as armed forces loyal to Lissouba battled independent partisan militias.

On the one side was the northern Mbochi ethnic group, which had been aligned with the military government of Sassou-Nguesso. On the other sides were two main southern groups, the Pool Lari and the coastal Vili. Transitional Prime Minister Milongo surrounded himself with Lari and Bakongo. Lissouba replaced them with his own people, the Nibolek, and "cleansed" the presidential guard. Although a mediation force was set up after a 30 January 1994 cease-fire, it was difficult to disarm the tribal factions.

In February, an international panel, which had been investigating irregularities in the 1993 elections, ruled that eight seats in the National Assembly had been illegally won and called for by-elections to be held. Meanwhile, tribal factionalism continued to erupt in violence as the political opposition to Lissouba coalesced to form, briefly, the Democratic Forces United (FDU). By mid-1994, the government, prompted by fears of allout civil war, announced it would work to integrate the military and security forces with members of tribal militias if they would agree to a cease-fire. Little was achieved in this area, and Lissouba blamed the unrest on neighboring countries, principally former Zaire. After the by-elections in 1995, the Lissouba regime took an authoritarian turn in the face of severe mismanagement and intractable street fighting, imposing restrictions on public demonstrations and eliminating press freedom.

Full-scale civil war broke out in June 1997 when Lissoubsa's forces surrounded Sassou-Nguesso's home in an apparent attempt to disarm his militia, which had besieged the capital. In late June, one of several cease-fires was broken as rebel forces shelled the Parliament building and fighting continued. In October 1997, forces loyal to Sassou-Nguesso (a Northerner) engaged the help of Angolan troops and forced Lissouba into exile. Sassou-Nguesso once again became president and replaced the 1992 constitution with a Fundamental Act, conferring sweeping powers upon his presidency. He formed a broad-based government that included former backers of Lissouba and Bernard Kolelas. The government convened a National Reconciliation Forum in January 1998. At that forum a 75-member National Transition Council (NTC) was elected, replacing the National Assembly. Members of opposition parties and civil society were included in the NTC.

Civil conflict between the government and armed groups of Southerners broke out again in mid-1998, intensifying in early 1999, before subsiding during the second half of the year. An estimated 10,000 people died and 800,000 civilians were displaced during the fighting, as rapes, looting, and destruction of many southern towns escalated.

The second half of 1999 saw the government regaining effective control over most of the south through military offensives, offers of amnesty, negotiations, and efforts to broaden the government's political base. The government signed a cease-fire and reconciliation accord with leaders of some rebel groups in November. In December 1999 Gabon's president Omar Bongo sponsored another accord, which involved the National Resistance Council, the only rebel group with military and political organization. With improved prospects for peace, Sassou-Nguesso declared a three-year transition period leading up to elections.

In presidential elections held 10 March 2002, Sassou-Nguesso was reelected president with 89.4% of the vote to Joseph Kignoumbi Kia Mboungou with 2.7%. In the legislative contest held 11 July 2002, the FDP won 56 seats to 10 seats for other parties in the Senate, and 83 seats to six seats for the UDR, three for the UPADS, and 45 seats for other parties. The most serious contenders—former President Lissouba and Prime Minister Kolelas—were banned from participation.

In late March 2002 conflict erupted in the Pool region between government forces and "Ninja" rebels loyal to the Rev. Frederic Bitsangou (alias Pasteur Ntoumi) with the result that thousands of people were trapped or displaced with little or no relief support for those caught in the fighting. A peace agreement reached on 17 March 2002 between the government and Ntoumi guaranteed amnesty to combatants willing to disarm, but by July 2003 several thousand were still awaiting either integration into the military or reinsertion into civilian life.