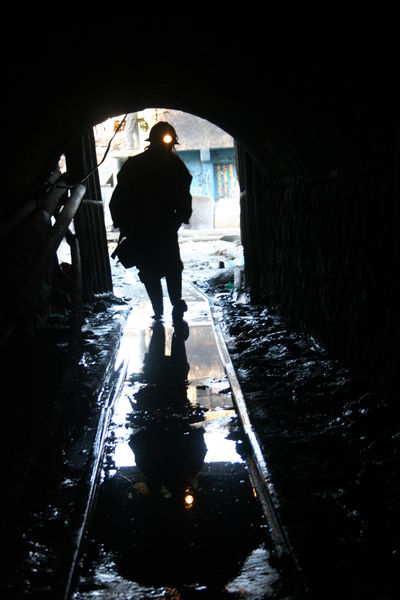 Mining was the country's leading industry in 2002, and diamonds, copper, and cobalt ranked first, second, and fourth, respectively, among export commodities. Mining has historically accounted for 25% of GDP and three-quarters of export revenues, in an export-oriented economy; in 2000, the mining sector's share of GDP was 6%, down by 21% from 1996. GDP declined by an annual average of 5% from 1998 to 2000. The outbreak of civil conflict in the DROC (then known as Zaire) in 1996 severely disrupted the economy, including metals mining, leaving diamond exports as the major source of revenue. Despite the collapse of much of the formal mining infrastructure, the DROC remained an important source of industrial diamond and cobalt. The value of mineral exports in 2001 was expected to be in the $1.3–1.9 billion range, and the public mining company La Générale des Carrières et des Mines (Gécamines) in 2002 reported total "global reserves" of 54 million tons of copper, 4.66 million tons of cobalt, and 6.4 million tons of zinc, expressed in contained metal. Gécamines, the country's most important company, produced all of its coal, cobalt, copper, and zinc. The Congo also produced, and was richly endowed with, cadmium, coal, columbium (niobium) and tantalum (locally referred to as "coltan"), germanium, gold, lime, manganese, petroleum, silver, crushed stone, sulfuric acid, tin, tungsten, uranium, and zinc. Uranium for the first US atomic bomb was mined in the former Zaire. Most foreign exploration activity and development-oriented feasibility work came to a halt in 1998, following the flare-up of a new full-scale civil war. Negotiations on a 1999 cease-fire agreement continued into 2001, and the decrease in military conflict permitted the government to address a proposal for new foreign investment and mining laws. Over half of the DROC's mineral exports took a circuitous route by air, riverboat, railway, and road from Shaba to the Matadi port (copper shipments could take 45 days to go from the plant to the dock), because the Benguela railway to Angola has effectively been closed since 1975; most of the rest went south by rail to South Africa, which was an important source of imports. Because of the size and wealth of its resources, the long-term potential of the Congo was more promising, and the country could return to world markets as an important supplier of cobalt, copper, diamond, and zinc, dependent on its ability to achieve political and economic stability and to put in place the legal and business framework needed to attract new foreign investment.

Until 1986, the former Zaire was the leading producer of industrial diamonds. The chief diamond-producing center was Mbuji Mayi, in East Kasai. The 80%-government-owned Société Minière de Bakwanga (MIBA) produced 6.2 million carats of low-value, near-gem-quality stones in 2001, compared to 4.3 million in 2000, 16.3 million in 1994, and 23.3 million in 1986. Twenty percent of diamond production was of gem quality. An additional 12 million carats was extracted by artisanal miners in the Tshikapa region, down from 19.3 million in 1998. The high levels of smuggling and undocumented production made figures uncertain. MIBA sold its output to a subsidiary of the DeBeers Consolidated Mines group under contract and accounted for 40% of official diamond exports. About two-thirds of the nation's annual diamond production was allegedly smuggled out through under-invoicing of legally recorded diamonds en route to the principal diamond-cutting center in Antwerp, Belgium. An estimated $400 million in diamonds and gold exited the DROC annually through smuggling. A UN panel of experts suggested that nearly one-half of the 4% of MIBA diamond production that is of near-gem or gem quality was being smuggled to South Africa for onward sale. Small-scale diamond and gold mining was legalized in 1982 in an effort to get the proceeds recorded and into the banks. Many peasants, teachers, and students left their previous pursuits for prospecting. Certification of the origin of diamonds was to begin in 2002.

Mine copper output in 2001 was 20,988 tons (5% of capacity), down from 39,651 in 1997. Copper was produced exclusively in the Shaba Region (formerly Katanga), shaba meaning "copper" in Swahili. Gécamines holdings in the Copperbelt, in Shaba, contained one of the greatest concentrations of high-grade copper and coproduct cobalt resources in the world. Since 1993, most mining operations have come to a standstill. This condition was attributed to aging equipment, lack of domestic and international investment, lack of spare parts, shortages of fuel, lubricants, and sulfuric acid, problems with transporting ore and finished products, theft of finished products, debts owed to the state electrical company and Société Interrégionale Zaïroise de Rail (Sizarail), flooding of open-pit mines, and the inability to retain professional and other personnel. First Quantum Minerals Ltd.'s small, high-grade Lonshi copper deposit began open pit mining in 2001; it contained a measured and indicated resource of 5.1 million tons grading 5.75% acid-soluble copper, and the Canadian company planned on mining 730,000 tons of ore during its 2001/02 fiscal year.

The output of cobalt from mined ore was 4,700 tons in 2001, down from 7,000 in 2000 and 42,700 in 1987. In 1994, Gécamines initiated a program to shift emphasis toward cobalt production, which jumped 57% that year, after falling 87% since 1987. Gécamines's strategy was to concentrate development and mining activities at cobalt-rich zones of several copper ore bodies, with plans to produce 10,000–15,000 tons of higher value cobalt by the end of 2002. The decline of copper and cobalt production in the 1990s has led to the deterioration of Gécamines. In 1998, Gécamines had 23 cooperative projects, including development of the Tenke-Fungurume deposits, which it hoped would return production levels of copper to 400,000 tons per year and cobalt to 25,000 tons per year.

OM Group, Inc. (OMGI), of the US, one of the world's largest consumers of refined cobalt, and l'Enterprise Générale Malta Forrest SPRL (EGMF) completed the first major foreign investment in Shaba in recent years; full operating capacity from their Luiswishi copper-cobalt mine was reached in 2000. As of early 2002, total resources remaining at the Luiswishi Mine—the only mine operating in Gécamines's Southern Group in 2001—were reported to be 7.5–8 million tons at a grade of 2.8% copper and 1.0% cobalt; the second phase of mining would develop 3.5 million tons of oxide reserves at a rate of 500,000 tons per year of ore. Anvil Mining NL, of Australia, and First Quantum announced plans to develop the high-grade Dikulushi copper-silver deposit. Anvil also held a number of exploration licenses covering more than 43,000 sq km (16,600 sq mi), including gold and platinum prospects near Kalemie, copper and gold prospects near Kapulo, and copper prospects near Lungeshi. The Kolwezi copper-cobalt tailings project, operated by a 50–50 joint US–UK venture, was based on reprocessing of a resource of nearly 113 million tons grading 1.49% copper and 0.32% cobalt of oxide tailings from the Kingamyambo and Musonoi tailings dams; mining would be by high-pressure water monitor guns with the material pumped along a slurry pipeline to a new leach SX-EW plant.

A UN Security Council panel of experts on the illegal exploitation of DROC's natural resources reported in 2001 that throughout its history, the Congo's "precious resources were plundered and mismanaged, and an informal economy based on barter, smuggling, and fraudulent trade in commodities thrived, becoming the sole means of survival for much of the population." The report called the effective collapse of all state institutions and structure in the Congo a fundamental cause of the existing pattern of resource exploitation. The panel also noted the regime of international sanctions, the illegal mining of coltan, the continued illegal artisanal exploitation of gold by Ugandan interests, government efforts to transfer rich copper-cobalt assets to Zimbabwean interests, the embezzling of the small amount of high-value gem-quality diamond produced by MIBA, the arrangements granting Zimbabwean interests exploitation rights to the Sengamines diamond concession, the taxation and illegal export routes of artisanal diamond produced in the Kinsangani area, and that one-third of the $300 million of diamond production was smuggled out of the country. The report concluded that the cease-fire left the exploitation of natural resources as the main activity of the foreign troops and armed groups, creating a self-financing situation where continuation of the conflict drove the exploitation of resources. The report recommended review and revision of all commercial contracts issued between 1997 and 2001 and a moratorium on the purchase of all commodities originating in areas under the control of rebel groups or where foreign troops were present.

According to the 1994 Constitution, the soil and subsoil belonged to the state. A draft of a new mining code, to reach parliament in 2002, was to create a framework of incentives conducive to private investment, including a change in the role of government from mining operator to mining regulator, creation of a single investment agreement framework, introduction of a special tax regime, and the option of issuing mining titles on a first-come-first-served basis, transparently managed. The government maintained at least partial ownership and generally majority ownership of all the productive and service sectors of the economy.

During the colonial period, mineral rights for the most part were vested in two charter companies—in which the state was a major shareholder—and in a number of railroad companies. Mining concessions were granted by the chartered companies or by the colonial government. The most important mining firms were subsidiaries of Belgian holding companies. Less than 20% of the conceded areas were actually being exploited, despite the fact that many undeveloped regions were known to hold significant deposits. In this fashion, mining companies such as the dominant Mining Union of Haut Katanga (UMHK) sought to husband their resources and to maintain stable levels of production to avoid a depreciation of their products and an early exhaustion of their reserves. Thus, copper production was held to around 300,000 tons per year. Ore-processing methods, meanwhile, were steadily improved, with electrolytic processing coming into widespread use by independence. Mining was the one sector of the economy that did not suffer a marked decline during the 1960–67 period of disruption and conflict. Output of some important minerals, notably copper, remained steady or even rose. In 1966, UMHK was stripped of all its mining concessions, which were turned over to the state-owned Gécamines in 1971. UMHK was eventually compensated for its nationalized assets, and management of the Katanga mines was contracted to the Belgian corporation SGM (controlled by the same financial interests as UMHK), which had been handling the refining and marketing of Katanga copper. In 1973, the former Zaire assumed control of the Belgium diamond-mining firm Mining Company of Bakwanga, and all other foreign mining concerns were instructed to sell 50% of their shares to the government. Some of the unexploited copper deposits taken over by the government have been contracted to foreign corporations operating in partnership with the government.