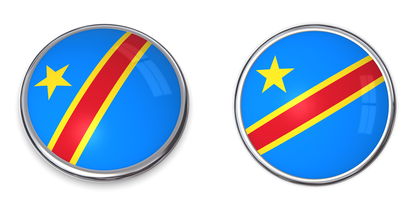 The agricultural sector supports two-thirds of the population. Agricultural production has stagnated since independence. The principal crops are cassava, yams, plantains, rice, and maize. The country is not drought-prone but is handicapped by a poor internal transportation system, which impedes the development of an effective national urban food-supply system.

Land under annual or perennial crops constitutes only 3.5% of the total land area. Agriculture is divided into two basic sectors: subsistence, which employs the vast majority of the work force, and commercial, which is export-oriented and conducted on plantations.

The production of cash crops was severely disrupted by the wave of civil disorder that engulfed the country between 1960 and 1967, and production fell again after many small foreign-owned plantations were nationalized in 1973–74. By the mid-1990s, the production of the DROC's principal cash crops (coffee, rubber, palm oil, cocoa, tea) was mostly back in private hands. Commercial farmers number some 300,000, with holdings between 12 and 250 ha (30 and 618 acres). Coffee is the DROC's third most important export (after copper and crude oil) and is the leading agricultural export. An estimated 46,000 tons were produced in 1999 (down from an average of 97,000 tons during 1989–91); 80% of production comes from the provinces of Haut Zaire, Equateur, and Kivu. Only 10% to 15% of production is arabica coffee, the vast majority being robusta; coffee exports are mostly sold to Italy, France, Belgium, and Switzerland. The collapse of the International Coffee Agreement in 1989 quickly led to a doubling of exports by the former Zaire, whereupon the surplus entering the world market drove down prices rapidly.

Rubber is the second most important export cash crop. The plantation crop has been slowly recovering from nationalization. Some plantations are now replanting for the first time in over 20 years. In 1999, production amounted to 18,000 tons. Palm oil production is concentrated in three large operations, two of them foreign-owned. Production in 1999 totaled 157,000 tons. Palm oil production remains profitable in the DROC due to a 100% tax on competing imported oil. The production of cotton engages about 250,000 farmers, who annually produce about 8,000 tons. Domestic production, however, is not sufficient for the country's textile manufacturers. Other cash crops produced in 1999 were 4,000 tons of tobacco, 3,000 tons of tea, and 7,000 tons of cocoa.

Wonderfull article. please transfer this article to my e-mail address. Thanks.
2
TBill

I like it. The numbers seem pretty accurate to me. Thank you.
3
daniel

i am congolese and really intrested in agriculture in my country ,i want to invest by using a modern agriculture to help our people what are the procedures,i am currently living in australia
4
ignace dan kafwimbi

Hello Mr daniel,
i have just ready your comment about your wish to invest into it. are you still interested?
5
Pascal Kamunga