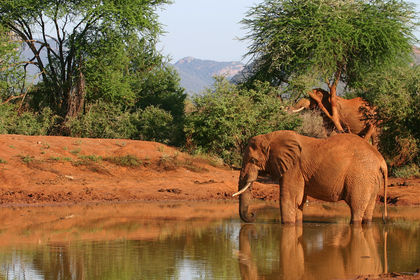 With two national parks, five game reserves, and one Wetland of International Importance, 9% of Chad's natural areas are protected. The chief environmental problem is increasing desertification after a decade marked by below-normal rainfall and periodic droughts. Warring factions in Chad have damaged the environment and hampered the efforts of the government to address environmental problems for 25 years. Locust swarms periodically cause crop damage. The availability of fresh water is also a major problem. Safe drinking water is available to 31% of urban dwellers and 26% of the rural population. About 82% of the nation's renewable water resources are used for farming activity.

Elephant herds were reported greatly decimated in the 1970s. As of the 2000, endangered species in Chad included the black rhinoceros, Dallon's gerbil, and African wild ass. The Sahara oryx, also called the scimitar-horned orynx, is extinct in the wild. Of 134 species of mammals in Chad, 14 are threatened with extinction. Three bird species out of 370 are also threatened. One reptile out of five and five plant species out of 1, 600 are in danger of extinction.

Thank you!!! - without this i wouldn't have been able to finish my reaserch paper!!!
2
Chad

Yeah thanks for a good article. Now I can finally finish my project!
3
athantasy

You guys did such a great job. I could read it over and over again there was just enough info. for me to be done with my project thank you so mmuch i loved it. geez i can't get over about how great it was
4
sabrina

great article my report needed alot of work until i read this. good information but needed a little bit more of environment problems. but good job!
5
Danny

Thx for the information, great help with my project! But i kinda agree with the other unknown cause some parts werent very uplifting when it came to that certain part. But other than that Great Job! :)
7
Unknown 2

Has there been a solution to what you have written as the problems in Chad? I would like to know.
8
Sky

Good job! Thanks you for the information ^^ without i would have never finish my project for school tomorrow. Keep up the good work. :D
9
samantha nicole

Thanks for writing this article!!

More info will be better!!!

thank you so much! this helped me so much with my assigment!
13
Marina

thanks wouldn't been able to do research project without this information.