Before its colonial history, the area now known as the Central African Republic was settled by successive waves of peoples, mostly Bantu. Both European and Arab slave traders exploited the area in the 17th, 18th, and 19th centuries, and slave raids and intertribal wars were frequent until the French conquest. In the 19th century, the main population groups, the Baya and the Banda, arrived from the north and east, respectively, to flee the slave trade.

The French explored and conquered the country, chiefly from 1889, when an outpost was established at Bangui, to 1900, as part of a plan to link French colonies from the Atlantic to the Nile. The strongest and most sustained opposition to the French came from Sultan Senoussi, who was finally defeated in 1912. Isolated local revolts continued well into the 20th century, however. The strongest and bloodiest of these, known as the War of Kongo-Wara, lasted from 1928 to 1931.

The territory of Ubangi-Shari was formally established in 1894, and its borders fixed by treaties between the European colonial powers. The western border with the German Cameroons was fixed by a convention with Germany in 1884; a convention of 1887 with Belgium's King Leopold II delineated the southern border with the Independent State of the Congo; the eastern border with the Sudan was fixed by an 1899 convention. These boundaries were drawn with little knowledge of the human geography of the area, so ethnic groups were sometimes separated into different territories. From 1906 to 1916, Ubangi-Shari and Chad were merged as a single territory. In 1910, Gabon, Middle Congo, and Ubangi-Shari (including Chad) were constituted administratively as separate colonies forming parts of a larger French Equatorial Africa. Ubangi-Shari's resources were exploited by French companies, and abuses of the forced labor system were common. 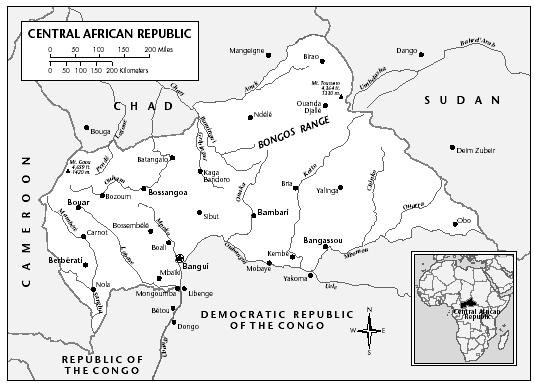 In 1940, the colony quickly rallied to the Free French standard raised at Brazzaville, Congo. After World War II, the territory elected Barthélémy Boganda as its first representative to the French Parliament in Paris. In a referendum on 28 September 1958, Ubangi-Shari voted to become an autonomous republic within the French community. The Central African Republic was proclaimed with Boganda as president on 1 December 1958. On 30 April 1959, Minister of the Interior David Dacko was elected to succeed Boganda, who had died in a plane crash on 29 March. The country declared itself an independent republic on 13 August 1960, with Dacko as president. In 1961, the constitution was amended to establish a presidential government with a single-party system.

On 1 January 1966, a military coup d'etat led by Col. Jean-Bédel Bokassa overthrew Dacko (Bokassa's cousin), abolished the constitution, and dissolved the National Assembly. Bokassa, who became president in 1968 and president for life in 1972, proclaimed himself emperor of the newly formed Central African Empire on 4 December 1976. A year later, on that date, he crowned himself emperor in a lavish ceremony at an estimated cost of $25 million—a quarter of the nation's annual export earnings.

On 20 September 1979, Dacko, with French support, led a bloodless coup that overthrew Bokassa while he was out of the country. The republic was restored, and Bokassa, who took refuge in Côte d'Ivoire and France, was sentenced to death in absentia for various crimes, including cannibalism. Moreover, an African judicial commission reported that he had "almost certainly" taken part in the massacre of some 100 children for refusing to wear the compulsory school uniforms. In January 1981, six of his supporters, including two sons-in-law, were executed.

A new constitution allowing free political activity was approved by referendum in February 1981. A month later, Dacko was elected, polling a bare majority against four rivals. Violence followed the election, which the losers charged was fraudulent. Economic conditions failed to improve, and Dacko was overthrown on 1 September 1981 by a military coup led by army chief of staff Gen. André Kolingba. Kolingba became chairman of the ruling Military Committee for National Recovery, and the constitution and all political activities were suspended. The Kolingba regime survived an attempted coup in 1982 and an aborted return by Bokassa in 1983. On 21 November 1986, Kolingba was elected unopposed to a six-year term as president, and a new constitution was adopted establishing a one-party state. The new ruling party, the Central African Democratic Party (Rassemblement Démocratique Centrafricaine—RDC), nominated a list of 142 of its members, from which voters elected 52 to the new National Assembly on 31 July 1987.

Bokassa made an unexpected return in October 1986 and was retried. On 12 June 1987, he was convicted of having ordered the murders of at least 20 prisoners and the arrest of the schoolchildren who were murdered. He was sentenced to death, but this was commuted to a life term in February 1988. He was released from prison on 1 September 1993, as a result of an amnesty. He died of a heart attack in Bangui on 3 November 1996 at age 75.

In April 1991, under pressure from France, the IMF, and local critics, Kolingba agreed to legalize opposition parties, many of which had already formed a united front to press for further reforms. Elections were held on 25 October 1992, but widespread irregularities led to the Supreme Court dismissing the results for both the National Assembly and the presidency. Elections were rescheduled, and on 19 September 1993 citizens elected Ange-Félix Patassé as head of the Movement for the Liberation of the Central African People (MLPC), president. A new National Assembly of 85 members was elected. Patasse's party won only 33 seats, and Kolingba's RDC won 14 seats. Despite some irregularities, an international observer delegation certified the validity of the outcome.

The transition from military to elected government proceeded smoothly although the economy faltered. The human rights picture improved although the security forces still exercised arbitrary power. In 1994 a new constitution instituting democratic reforms was approved through a national referendum.

In recent years, the government has been beset by military unrest. In 1993, there were two brief mutinies. Three mutinies followed in 1996 over nonpayment of salaries (up to 12 months salary arrears for civil servants and 9 months for the army), with ethnic and political violence spreading into 1997. The French army assisted to quell the mutinies, which left over 100 people dead and hundreds more injured.

With mediation from four heads of neighboring states, the government and mutineers reached an agreement, the Bangui Accord, in January 1997. The accord included the necessary elements for the comprehensive settlement of the crisis. An 800-strong Inter-African Peace Force (MISAB) composed of six French-speaking countries, approved and supported by the UN and French government, was deployed in the country in February 1997. On expiry of the largely successful (UN) mandate of MISAB and the withdrawal of French soldiers in April 1998, the UN deployed a peacekeeping force (1,498 military personnel) called MINURCA. Its mandate was mainly to monitor implementation of the Bangui Accord. MINURCA succeeded in maintaining security, stability, and an environment conducive for peaceful elections.

On 22 November and 13 December 1998 parliamentary elections were held, overseen by MINURCA. The ruling MLPC won 47 of the 109 seats of the National Assembly, but the opposition formed a parliamentary majority. Patassé won the presidential elections held on 19 September 1999, taking 51.6% of the vote. His runner-up, Kolingba, got 19.3%. Despite opposition allegations of rigging and irregularities, the UN and other international observers declared both elections generally free and fair.

On 15 February 2000, MINURCA successfully completed its mission and the withdrawal of UN troops. It was replaced by a UN Peace Building Office, with a one-year mandate in support of the new government's efforts to consolidate peace and national reconciliation, strengthen democracy, promote national reconstruction and economic recovery. A degree of stability has returned to the country. However, many observers believe that durable peace in the Central African Republic will depend on the successful restructuring of the armed forces.

On 28 May 2001, Kolingba led an unsuccessful coup attempt against Patassé; at least 59 were killed and 15,000 fled Bangui in 10 days of violence. Chadian and Libyan troops, and rebel troops from the Congolese Liberation Movement (MLC) from the Democratic Republic of the Congo, aided Patassé in suppressing the coup attempt. Economic instability followed the aborted coup. Former army chief of staff, François Bozizé, was accused of being involved in the coup attempt, and in November, fighting broke out between government forces attempting to arrest Bozizé, and Bozizé's supporters. Thousands fled the fighting; Libya, Chad, and the United Nations intervened to attempt to resolve the conflict. Bozizé fled to Chad.

In May 2002, the government lifted its curfew imposed after the May 2001 coup attempt, in an effort to demonstrate the return of peace and security to the country. However, in October, Bozizé's supporters led an armed insurrection against the government. There were 6 days of heavy fighting in Bangui, but Libyan forces aided Patassé's troops in suppressing the rebellion.

On 15 March 2003, Bozizé took power in a coup, capturing Bangui, declaring himself president, suspending the constitution and dissolving parliament. Patassé had been in Niger for a meeting of African heads of state; he subsequently went to Cameroon. Bangui was ravaged by 2 days of looting and violence, in which at least 13 people were killed. Bozizé stated he would replace the National Assembly with a transitional council formed by political parties, former heads of state, and others, including human rights groups. He stated he would hold elections, but did not specify when they would be held.