Côte d'Ivoire has one of the best-developed and best-maintained transportation systems in Africa. The state controls a 660-km (410-mi) section of a 1,146-km (712-mi) railroad that runs north from Abidjan through Bouaké and Ferkéssédougou to 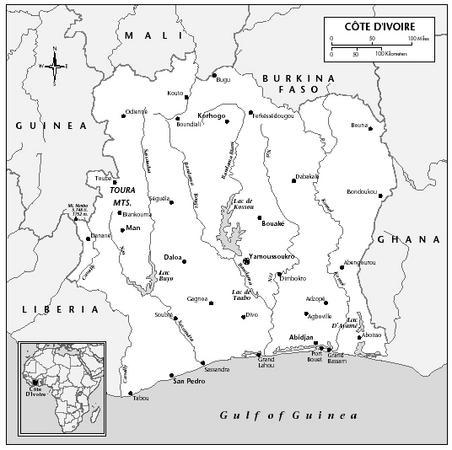 Harbor activity is concentrated at Abidjan (West Africa's largest container port), which has facilities that include a fishing port and equipment for handling containers, and San Pedro, a deepwater port that began operations in 1971. There are also small ports at Sassandra and Tabou. Two nationalized shipping lines serve West Africa and Europe. As of 1998, the merchant marine had one oil tanker (1,000 GRT or over) totaling 1,200 GRT. However, in 2002, there is no merchant marine. There are 980 m (56 mi) of navigable rivers, canals, and numerous coastal lagoons.