At the end of 1992 there were about 271,700 refugees in Burundi. Some 25,800 were from the former Zaire and 245,600 from Rwanda; most of the latter were Tutsi from Hutu-ruled Rwanda. When ethnic massacres broke out anew in Rwanda in 1994, several hundred thousand Rwandan refugees streamed across the border into Burundi. By August 1996, all of these refugees had returned to Rwanda as they were compelled by the insecurity in Burundi. At the end of 1992 Tanzania was harboring 149,500 refugees from Burundi, Rwanda 25,200, and Zaire 9,500. Hundreds of thousands of Hutu from Burundi crossed into Rwanda, Tanzania, and the former Zaire in late 1993 to escape massacre at the hands of the Tutsi-dominated army. In early 1994, many of these refugees returned home. In 1994, with the outbreak of the civil war in Rwanda, 270,000 Burundi refugees who were there returned home or fled to Zaire. By November 1996, 120,000 Burundians returned home from the former Zaire. However, there were still over 240,000 Burundi refugees still in the DROC and Tanzania.

At the end of 1996, it was estimated that 500,000 Burundis were still displaced internally, either clustered with military posts if they were of Tutsi ethnicity or in the hills if they were Hutus. In January 1999 Burundi and Tanzania took steps to revive talks on repatriation. However, a series of rebel attacks in the Ruyigi province in April 1999 seriously hindered repatriation efforts in that area. Increased violence in Bujumbura, beginning in July 1999, also slowed efforts. As of 1999, repatriation figures remained below expected levels. However, the majority of Congolese refugees who fled the DROC and came to Burundi in 1998 had returned home. The net migration rate for 2000 was -12.9 migrants per 1,000 population, or a loss of 80,000 people. 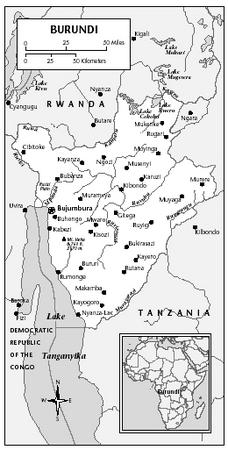 Of the 77,000 migrants living in Burundi in that year, over one-third were refugees.