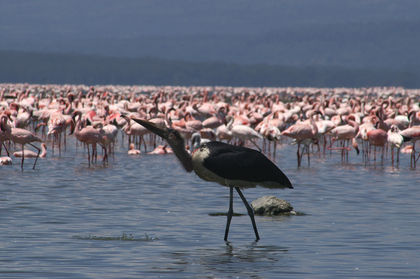 Burundi in general has a tropical highland climate, with a considerable daily temperature range in many areas. Temperature also varies considerably from one region to another, chiefly as a result of differences in altitude. The central plateau enjoys pleasantly cool weather, with an average temperature of 20° C (68° F ). The area around Lake Tanganyika is warmer, averaging 23° C (73° F ); the highest mountain areas are cooler, averaging 16° C (60° F ). Bujumbura's average annual temperature is 23° C (73° F ). Rain is irregular, falling most heavily in the northwest. Dry seasons vary in length, and there are sometimes long periods of drought. However, four seasons can be distinguished: the long dry season (June–August), the short wet season (September–November), the short dry season (December–January), and the long wet season (February–May). Most of Burundi receives between 130 and 160 cm (51–63 in) of rainfall a year. The Ruzizi Plain and the northeast receive between 75 and 100 cm (30–40 in).

these articles are ones that i enjoy. The information I have read is very accurate and can be trusted by many americans.
2
HARLEY

Doing school projects is such a hassle and this website has really helped with finding the information i needed for my project.
3
Donald Werner

Visitors to Burundi should note that in the last few years the weather pattern in Burundi has become less predictable. One year recently areas of Burundi suffered from drought in the north while at the same time the south was experiencing flooding.
4
Alina Anderson

Very helpful. Short, but informative. It shows a summary of Burundi's climate. And also, it gave my enough info to complete my research about Burundi. And I really love the photo!Thank you.
5
William Brady

not good! it could hold more info like other things that i cant think of right now
7
Fiona

the site has been really helpful especially when i couldn't access the information i needed elsewhere...long live 'encycl. of nations'
9
rudraksh

very valuable information what this site has given