Until the end of the 19th century, the history of Burkina Faso is the history of the empire-building Mossi. According to legend and tradition, supported by some ethnographic evidence, the Mossi entered the region from the 11th to the 13th century as a warrior group from Central or East Africa and subjugated the weaker aboriginal Ninigi tribes. They called their land Mogho ("country of the Mossi") and established five independent kingdoms—Tenkodogo, Yatenga, Gourma, Zandoma, and Ouagadougou—each ruled by a king, the mogho or moro naba ("ruler of the Mossi"). Ouagadougou was the most powerful of the kingdoms.

Through the centuries, the Mossi population was augmented by groups of immigrants, such as the Hausa and the Fulani, who settled in Mossi territory but retained their ethnic identity. Contact and conflict with Islam came early. The Mossi were engaged, beginning in the 14th century, in recurrent wars with the neighboring empires of Mali and Songhai, and they occupied Timbuktu (now in Mali) at various times. They were decisively defeated by Askia Daoud of Songhai in the 16th century and thereafter ceased fighting their powerful neighbors. Their warrior tradition and their internal unity continued, however.

By the 19th century, Mossi power seems to have declined, and when the first known European incursions occurred, late in the 19th century, internal dissensions made the Mossi prey to the invaders. A French lieutenant, Voulet, was sent with an infantry column to subjugate the territory in 1896. Ouagadougou fell to Voulet in September of that year. The Mossi accepted French domination as a form of protection from their hostile neighbors. 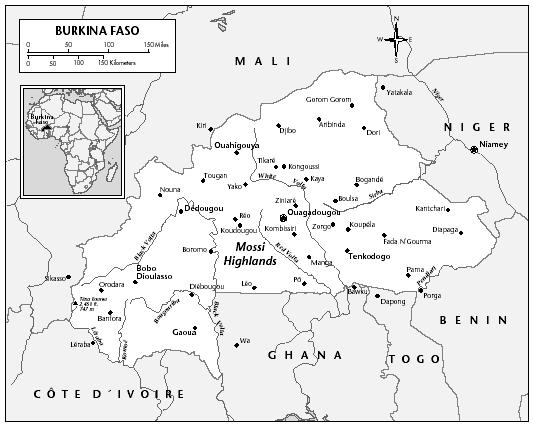 was divided among Niger, French Sudan (now Mali), and Côte d'Ivoire. Throughout the colonial period, the traditional political structure of the Mossi was retained, and the moro naba of Ouagadougou was regarded by the French as the emperor of the Mossi. When World War II broke out, the moro naba sent his two eldest sons to fight for France, and more than 10,000 youths in the territory followed suit. The restoration of Upper Volta as a territorial unit, long the aim of the traditional chiefs, was made a reality in 1947. In 1958, voters in Upper Volta overwhelmingly approved the new constitution of the Fifth French Republic, and Upper Volta's territorial assembly voted to make the country an autonomous state within the French Community. By this time, the traditional chiefs had lost most of their influence, and political power was in the hands of the young, European-educated elite.

The republic achieved independent status on 5 August 1960. Maurice Yaméogo, leader of the Volta Democratic Union, became president. His government quickly took on an authoritarian cast and banned all opposition parties. In 1965, a single election list was offered to the people, and the opposition— joined by civil servants, trade unionists, and students—fomented riots. Yaméogo was replaced in January 1966 by Lt. Col. (later Gen.) Sangoulé Lamizana, a former army chief of staff, who suspended the 1960 constitution, dissolved the National Assembly, and formed a military-civilian cabinet.

During the 1970s and early 1980s, Upper Volta suffered from severe political instability. A constitution that provided for an elected assembly was adopted in 1970, but factional struggle broke out and became so disruptive that in February 1974, President Lamizana announced that the military had again taken over the government. A new constitution was approved in 1977; under this constitution, Lamizana won election to the presidency in 1978. On 25 November 1980, however, Lamizana was deposed in a bloodless coup led by Col. Sayé Zerbo, who became president. Zerbo's government was overthrown on 7 November 1982 by yet another army coup, and Maj. Jean-Baptiste Ouédraogo was named president.

Under the moderate Ouédraogo regime, a military faction emerged that was suspected of having close ties to Libya. Prominent in this group was Capt. Thomas Sankara, who served as prime minister from January until May 1983, when he was purged by Ouédraogo. On 4 August 1983, in what was Upper Volta's third coup in three years, Sankara seized power. As many as 20 persons may have died in the disturbances. After the coup, Sankara, who emerged at the head of the ruling National Revolutionary Council, sought to retain Upper Volta's traditional foreign aid ties with the West while establishing warm relations with such nations as Ghana, Libya, the USSR, and Cuba.

Sankara sought to instill his nation with a spirit of revolutionary fervor. In August 1984, on the first anniversary of his rule, he renamed the nation Burkina Faso, meaning roughly "Land of Upright Men." He led a campaign against corruption and tax evasion, and he trimmed government spending by cutting the salaries of civil servants, an action that earned him the enmity of the nation's small but influential labor unions. A substantial number of politicians, soldiers, government officials, and labor leaders were jailed, and seven men were executed in 1984 for allegedly plotting to overthrow the government.

During December 1985, Burkina Faso fought Mali over possession of a 20-by 160-km (12-by 100-mi) disputed border strip (there had previously been clashes in 1974 and 1975). On 22 December 1986, the International Court of Justice ruled in favor of dividing the territory into roughly equal parts, a decision both nations accepted.

On 15 October 1987, faced by opposition among the trade unions and civil servants, the government was overthrown by an army unit led by Capt. Blaise Compaoré, the president's chief adviser, said also to have been his inseparable companion. Sankara and 12 aides (including two of the coup plotters) were immediately shot, and Compaoré assumed the presidency. Executions of highly placed military men followed a coup attempt on 18 September 1989.

At the start of the 1990s, the authorities sought to legitimize their position at the ballot box, including the drafting of a new constitution calling for multiparty elections for president and a national legislature. In March of 1991, the ruling party abandoned its Marxist ideology and embraced free enterprise. Controversial presidential (December 1991) and parliamentary elections (24 May 1992) led to no governmental change. Compaoré ran unopposed for president and his party, the Popular Democratic Organization—Worker's Movement (ODPMT), carried the legislative elections. Only three opposition parties contested seats nationwide; 35 parties boycotted the poll and only 35% of eligible voters voted. The ODP-MT won 78 of 107 seats, with 9 other parties splitting the remainder of the vote. The government convened on 15 June and Youssouf Ouédraogo was named prime minister. The introduction of multi-party competition was a major reform, but the lack of probity in the electoral process prompted critics to label the government and its reforms a "shamocracy."

Under Compaoré, Burkina Faso has conducted an active foreign policy in West Africa. It sent troops to Liberia and harbors dissidents from Gambia. This has alienated Compaoré from his fellow West African leaders and from western governments, including the United States, which recalled its ambassador in 1992. Burkina Faso continued its support of Liberian insurgent Charles Taylor and his NPFL despite a West-Africa-wide deployment of forces—ECOMOG—in Liberia to help resolve the lingering and bloody civil war there. Burkina Faso refused to contribute forces to ECOMOG, despite international pressure, until 1995, when the Compaoré regime announced it was satisfied with the cease-fire accord signed that year in Nigeria.

Human rights violations have been commonplace under the Compaoré regime. The government has suppressed a vocal independent press, and the security forces have used excessive force against demonstrations and government critics. In December 1998, the sudden and suspicious death of Norbert Zongo, an investigative reporter, unleashed a backlash of demands for reforms. Zongo had been investigating allegations that the President's brother, Francois Compaoré had taken part in the murder of his own chauffeur, David Ouedraogo. Zongo's charred body and those of three companions were found in a bullet-riddled car near the capital.

In March 1999, thousands of students, school children, and other protesters marked Zongo's death with a peaceful march to his gravesite. Since then, high school and university student groups, and a group known as Le Collectif comprising human rights groups, NGOs, labor unions, and political parties, have organized numerous stay-at-home's, and strikes throughout the country. Besides a full and independent investigation into Zongo's death, they demanded reforms to the judiciary, guarantees for human rights, revisions to the Constitution, and to the electoral code. In April 2000, the Committee for the Protection of Journalists (CPJ) condemned the closure of a private radio that had aired a communiqué from a coalition of opposition and human rights groups, calling for a rally to protest the government's handling of the Zongo case.

Progress toward rule of law was made when the National Reconciliation Commission (NRC), established by Compaoré in November 1998, asked the government in February 2000 to arrange special trials of people implicated in economic crimes and political killings. Though estimates placed the number of political killings since 1989 at 100 or more, 60 of these cases and compensation for widows and orphans were to be handled by these special units located in each of the districts. In 2001, Compaoré established a fund of $7.75 million to compensate families of victims of political violence and rights abuses.

In 2001 and 2002 the country experienced outbreaks of meningitis that killed more than 2,500 in two consecutive seasons. Since September 2002, more than 150,000 Burkinabe refugees returned home owing to the civil conflict in Cote d'Ivoire. The May 2002 parliamentary elections marked the first time in Burkina's history that three consecutive legislative elections were held without a military coup. It was also the first time that the single ballot was used in an election; 30 parties participated in the elections.