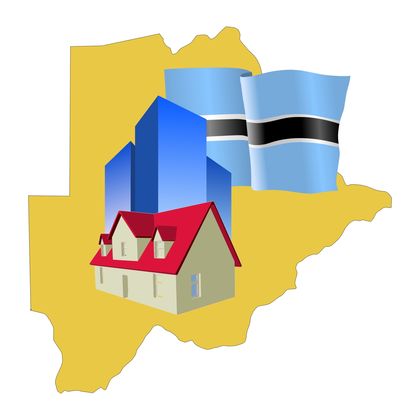 Botswana is regarded by most economists as one of Africa's major success stories. The country's economy was dependent almost entirely on livestock production until the 1970s, when it became an important exporter of diamonds and other minerals. Then, the Botswana Development Corporation, adopting a conservative investment policy, actively sought foreign capital for investments in crop agriculture, tourism, and secondary industries. The rapid growth in diamond production helped Botswana achieve average high economic growth from independence through the early 2000s.

The diamond industry developed in 1971 in cooperation with De Beers Consolidated Mines. Botswana is the world's largest producer of gem diamonds in value terms. It is also the world's most diamond-dependent economy. Diamond production in 2001 stood at over 25 million carats. Botswana also produced copper-nickel matte production, and had significant coal deposits. Botswana had exploitable deposits in platinum, gold, and silver as well. Exploration for petroleum and natural gas deposits has been underway in western Botswana.

In spite of the gains recorded by the mining sector, agriculture employed more than 80% of the labor force in 1999. Provided with inadequate rainfall and poor soil, agriculture supplied only 50% of the country's food needs and accounted for only 4% of GDP. Commercial farms played a critical role in agricultural and livestock production. Of Botswana's total output of sorghum, maize, millet, beans and pulses, 37% was produced by 100 of the 360 commercial farms. Ownership of the national herd of cattle was highly concentrated: 5% of households owned over 50%.

Botswana had the highest rate of economic growth in the world from 1966–1997 (averaging at 9.2%), after which it was adversely affected by the Asian financial crisis. Economic growth was 7.7% in 2000; it had an inflation rate of about 10%. Although Botswana had an advanced infrastructure with good roads, communications, and dependable utilities, there was a general lack of technical and managerial skills among its workers. High rates of unemployment and poverty keep the country from fully sharing its economic success with all its citizens. HIV/AIDS rates are among the highest in the world, with 38.5% of the sexually active population (defined as those between the ages of 15 and 49) being HIV positive. This high prevalence rate is expected to force a greater percentage of the population into poverty.

Botswana was in the process of diversifying its economy in 2003, and was engaged in promoting sustainable development. It was encouraging foreign direct investment in non-mining sectors of the economy, including light manufacturing, tourism, financial services, and pharmaceuticals.

This piece of information was helped full because it was short and it had a lot of info to give. well it helped do my essay for one of my classes.
3
Adonis

Thank you for the article. Very informative. I am wondering if you can address the following questions. I am doing a research on Botswana with a view of setting up a business as a service provider to the Botswana Financial Sector:

I can possibly follow the above with additional questions. However, please feel free to provide any material that can aid my market research effort as I plan to build a case for investing in Botswana.