Originally inhabited by people of the Khoisan group (Bushmen), Angola was occupied by various Bantu peoples from farther north and east between 1300 and 1600. By the 15th century, several African kingdoms had developed; the most notable were the kingdoms of the Kongo and Mbundu peoples. The Portuguese arrived on the coast in the late 15th century, and Luanda was founded as a trading settlement in 1575. The Portuguese 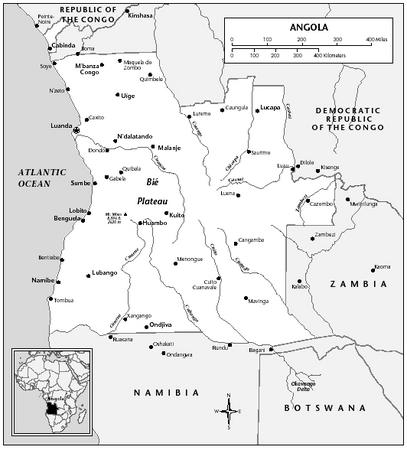 developed trade with African nations, particularly with the Mbundu, whose ruler was called the ngola (from which the name of Angola comes). The slave trade assumed paramount importance during the 17th century, when slaves were carried to Portuguese plantations in Brazil. From the late 16th through the mid-19th century, Angola may have provided the New World with as many as two million slaves.

Slavery was formally abolished (with a 20-year grace period) in 1836, although under Portuguese rule forced labor was common until the early 1950s. Trade in other commodities was needed to replace the slave trade, and between 1870 and 1903 the Portuguese claimed control over more and more of the interior of the country. To strengthen their control, the Portuguese began building the Benguela railway in 1902. European domination continued until, in 1951, Angola was made an overseas province of Portugal. Increasing numbers of Portuguese settlers came to Angola, and by 1960 there were about 160,000 Europeans in the country.

Organized armed resistance to Portuguese rule began on 4 February 1961, when urban partisans of the Popular Movement for the Liberation of Angola (MPLA) attacked the São Paulo fortress and police headquarters in Luanda. Within six weeks, the war had been spread throughout the north by the rural guerrillas of another organization, the Union of Angolan Peoples, which later became the National Front for the Liberation of Angola (FNLA). The FNLA, headed by Holden Roberto, set up a revolutionary government-in-exile in Zaire on 3 April 1962. A third movement, the National Union for the Total Independence of Angola (UNITA), headed by Jonas Savimbi, came into being as the consequence of a split in the government-in-exile, of which Savimbi had been foreign minister. The three movements, which were divided by ideology, ethnic considerations, and personal rivalries, were all active militarily when the Portuguese decided to end their African empire after the coup in Portugal on 25 April 1974. After negotiations with FNLA, MPLA, and UNITA leaders, the Portuguese agreed on 15 January 1975 to grant complete independence to Angola on 11 November 1975. The agreement also established a coalition government headed by a three-man presidential council including MPLA leader António Agostinho Neto, Roberto, and Savimbi. As independence day approached, however, the coalition government fell apart; mediation attempts by other African countries failed.

Thus, when Angola became independent, each of three rival organizations had its own army and sphere of influence. Based in Zaire, the FNLA, which primarily represented the Kongo people, received financial support mainly from China and the US. UNITA and the FNLA together established the Popular Democratic Republic of Angola (with its capital at Huambo), supported by US funds, South African troops, and some white mercenaries (mostly former commandos in the Portuguese armed forces). UNITA had the support of the Ovimbundu, the largest ethnic group in Angola. The MPLA, a Marxist-oriented party, drew its supporters from mestiços in Luanda and other urban areas and from the Mbundu people. It received military as well as financial assistance from the USSR and from some 15,000 Cuban soldiers. The MPLA and Cuban forces soon seized the initiative, and by mid-February 1976 the FNLA and UNITA strongholds had fallen. On 11 February, the OAU formally recognized the MPLA government in Luanda as the legitimate government of Angola. South African troops subsequently withdrew, but the Cuban forces remained to consolidate the MPLA's control over the country and provide technical assistance. By 1982 there were 18,000 Cuban troops in Angola, with the number reportedly rising to 25,000 during the first half of 1983 and to 30,000 in late 1986.

A coup attempt on 27 May 1977 by an MPLA faction opposed to the Cuban involvement was suppressed and followed by a massive purge of the party. Activist groups were reined in, and the organization became more centralized. Meanwhile, UNITA, which had never been rooted out of southern Angola, began to regroup. Despite the Cuban troops and Soviet-bloc military assistance, the MPLA government remained vulnerable to the UNITA insurgency, operating from the southern Angolan countryside and from Namibia. Implicated in this conflict was the government of South Africa, whose continual incursions into southern Angola in the late 1970s and early 1980s were aimed chiefly at the forces of the South West Africa People's Organization (SWAPO), who were using Angola as a base in their bid to force South Africa to give up Namibia. By 1983, South African soldiers were said to be permanently stationed in southern Angola; in December, South Africa launched a major offensive in the region. In addition to harassing SWAPO, South Africa was continuing to provide supplies to UNITA. The Angolan government resisted efforts by the United States to secure the withdrawal of Cuban troops in return for Namibian independence and a South African pullback.

Fighting escalated in 1987 and 1988 even as negotiations for a settlement progressed. An Angolan settlement became entangled with the resolution of civil war in and the independence of Namibia. A controversial battle at Cuito Cuanavale in 1988, at which South African and Angolan/Cuban forces were stalemated, led to a South African willingness to agree to end its involvement in Angola and eventually to withdraw from Namibia. Included in the settlement was the Cuban commitment to a phased withdrawal of its military forces from Angola by mid-1991.

Those two agreements, signed on 22 December 1988 in New York by Angola, South Africa, and Cuba, also included a pledge that the signatories would not permit their territories to be used "by any state, organization, or person in connection with any acts of war, aggression, or violence against the territorial integrity…of any state of southwestern Africa." This meant that South Africa would be prohibited from aiding UNITA and Angola would remove the ANC's training bases.

All the major parties had been brought to the conclusion that a settlement was better than a prolongation of the fighting. The Soviet Union wanted to disentangle itself from Angola. The administration of US president Ronald Reagan wanted to take the lead in a successful resolution, and its Assistant Secretary of State for African Affairs, Chester A. Crocker, took the lead in the negotiations.

But as settlement in Namibia was moving forward, it proved much harder to bring the Angolan government and UNITA to terms. At a summit at Gbadolite involving 19 African leaders, MPLA Leader José Edvardo dos Santos and Savimbi shook hands publicly and endorsed the "Gbadolite Declaration" (cease-fire and reconciliation plan) on 22 June 1989. But from the start, the terms were disputed and swiftly unraveled. The parties returned to the battlefield.

Yet, the powers began to scale back their support. The relaxation of cold war tensions provided the basis for contacts between the warring parties. Progress moved in fits and starts and in April 1991, Savimbi and dos Santos initialed an agreement that led to the establishment of a UN-supervised cease-fire and a process of national reconciliation.

Tension increased when UNITA took de facto control of several provinces, and its generals were withdrawn from the officially "merged" national army. Fighting broke out in Luanda in October and more than 1,000 were killed in a week. UNITA gained control of 75% of the country. Its refusal to accept UN-brokered cease-fire terms agreed to by the government in May led to a Security Council resolution on 1 June 1993, condemning unanimously UNITA for endangering the peace process and to US recognition of the Angolan government on 19 May. In 1994, it was estimated that 1,000 were dying every day in the fighting.

On 20 November 1994, the Lusaka Protocol was signed, promising a new, if tenuous, era of peace in Angola. The third peace effort between the opposing groups, it was the first to guarantee a share of power to UNITA and the first to be supported by over 6,000 armed UN peacekeepers. Demobilizations of fighters were suspended and renewed as new offensives broke out and were halted. In 1995, the international community imposed sanctions against UNITA, though several governments have violated them, including African countries serving as arms transshipment points. In September 1995, the United States pledged $190 million to support Angolan reconstruction and development at the Brussels Roundtable.

In June 1997, the government and UNITA found themselves involved on opposite sides of the Zaire civil war (now the Democratic Republic of the Congo—DROC). UNITA supported its ally, President Mobutu Sese Seko, while the government backed Laurent Kabila. Following Kabila's victory in May 1997, and subsequent to the 1998 invasion of DROC by Rwanda and Uganda, dos Santos joined other SADC leaders in providing military support to the Kabila government. By July 1999, all sides at war had signed the Lusaka Accords leading to an eventual withdrawal of most foreign troops by 2003.

In Angola, full-scale war resumed as the government launched offensives in December 1998, and again in March 1999. In February 1999, the UN Security Council voted to end its peacekeeping operations after Secretary-General Kofi Annan declared there was no longer any hope of carrying out the 1994 Lusaka peace agreement. In August 1999, the Office for Coordination of Human Affairs estimated 2.6 million persons were internally displaced in Angola. The following month, Human Rights Watch released a 200-page report detailing how the UN deliberately overlooked evidence showing rearmament and retraining of soldiers by both sides in breach of the 1994 accords. In October 1999, UNITA's main headquarters at Bailundo and Andulo had fallen, and in February 2000, the Fowler report was issued on strengthening UN sanctions against UNITA.

In February 2002, prospects for peace changed dramatically when the army announced that it had killed Savimbi in an attack in southeastern Angola. In addition, the death from illness of Savimbi's second-in-command, General Antonio, further weakened UNITA's military capacity. In March 2002 UNITA commanders issued a joint communiqué with the Angolan army (FAA) confirming a cessation of hostilities and reiterating unequivocal support for a political settlement based on the 1994 Lusaka Peace Accord. A peace accord between the government and UNITA followed in April.

As disarmament, demobilization and reintegration of the armed forces, the repatriation of refugees, and the arduous task of rebuilding the country got underway, dos Santos said he would not seek re-election in the next elections scheduled for late 2003—early 2004. However, his departure depends on a successor who can be trusted not to prosecute him for human rights abuses and large-scale diversion of state funds. He may choose a hardliner to succeed him, who will permit dos Santos to run a shadow government.