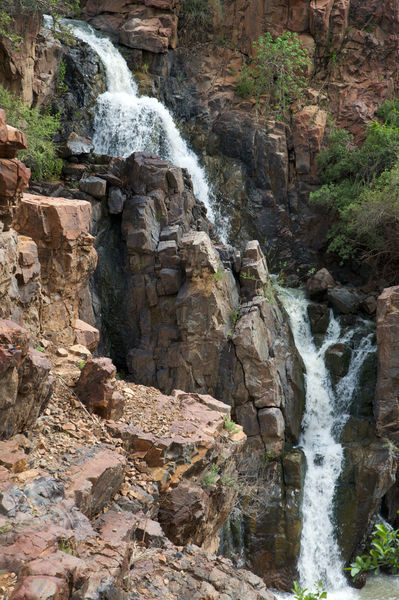 Angola's climate varies considerably from the coast to the central plateau and even between the north coast and the south coast. The north, from Cabinda to Ambriz, has a damp, tropical climate. The zone that begins a little to the north of Luanda and extends to Namibe, the Malanje region, and the eastern strip have a moderate tropical climate. Damp conditions prevail south of Namibe, dry conditions in the central plateau zone, and a desert climate in the southern strip between the plateau and the frontier with Namibia. There are two seasons: a dry, cool season from June to late September, and a rainy, hot season from October to April or May. The average temperature is 20° C (68° F ); temperatures are warmer along the coast and cooler on the central plateau. The Benguela Current makes the coastal regions arid or semiarid. The annual rainfall is only 5 cm (2 in) at Namibe, 34 cm (13 in) at Luanda, and as high as 150 cm (59 in) in the northeast.

This site is good and really informative.!

I got a new job offer in Angola so I try to search it right here cause you know, we need to be aware the climate and the weather of the country we are going into. and yeah.. its really informative.. I have an idea now if I will grab and accept the Job offer or not.

Thank you for this site.
2
Annabelle

I'm doing a project and this site was very helpful, I am so glad I found it! I'm sure that I'll get a better grade on my project b/c of this site!!! Thank you so much!
3
jery

good site needs to go into more depth, that would be a great improvement
4
Chris

This site is very informative! I am doing a report on Angola and This site was a real help.
5
Carly

i really liked this it helped me a lot on my project for school. this was to be the last thing for my report, but i keep on adding stuff on it thank you so much! it really help im sure i will get a good grade.:)
6
dalton

hello my name is josh im an american who lives in china. im 13 years old and have a middle school education
7
drlen

Well, quite good the information here. In fact I am planning to get a job in the said country, browsing these site lighthen my doubts in getting the job. Hope to see you soon people of Angola.

Thanks to this site.
8
carlosm

I AM GOING TONSTART A JOB IN ANGOLA AND YOUR INFORMATION HAS HELPED ME TO KNOW THE COUNTRY BETTER. THANKS.
9
Jess

I think imma get a good grade on this research paper I really need to decide on a better known country next time.
10
jay

I have a project i'm working on and this helped me a lot Thanks to this website i have a lot of information THANKS!
12
jimmy

this website was very helpful for my project at school thanks : )
13
Mariam

VERY good site. I am doing a project on Angola and it was helpful
15
jacob

hey guys i really like this site and it helped me on a model u.n. research. Thankyou
16
gabby