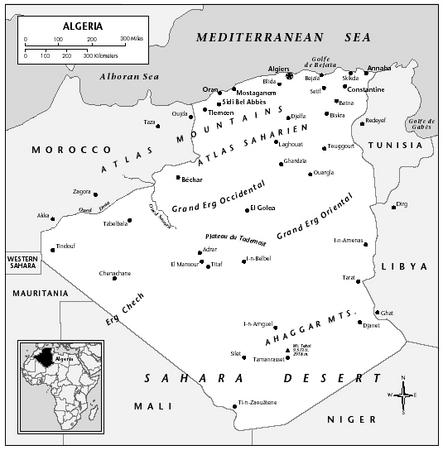 east-west line linked with the railways of Tunisia and Morocco and of lines serving the mining regions of Béchar (formerly Colomb Béchar); the esparto grass country on the High Plateaus; the date-producing areas of Biskra, Touggourt, and Tebessa; and the main port cities.

Roads are most adequate in the Tell zone; in the mountainous and rural areas, they are relatively poor. In 2002 there were 104,000 km (64,625 mi) of roads, of which about 71,656 km (44,527 mi) were paved (including 640 km or 398 mi of expressways), used by 589,900 passenger cars and 396,200 commercial vehicles in 2000. The French colonial administration built a good road system, partly for military purposes, which after independence was allowed to deteriorate to some extent; however, new roads have been built linking the Sahara oil fields with the coast. Algeria's portion of the trans-Saharan highway, formally known as the Road of African Unity, stretching about 420 km (260 mi) from Hassi Marroket to the Niger border south of Tamanrasset, was completed in 1985.

Algiers is the principal seaport. Other significant ports are Arzew, Bejaïa (Bougie), Skikda (a large gas-exporting center also known as Philippeville), Oran, Annaba, Ghazaouet, and Mostaganem. Algeria's merchant fleet numbered 73 ships of 1,000 GRT or over, totaling 903,944 GRT as of 2002

An extensive air service uses 136 airports and airstrips, of which 54 have paved runways in 2001. The main international airport, H. Boumediene Airport, is about 20 km (12 mi) from Algiers. Constantine, Annaba, Tilimsen (Tlemcen), and Oran have smaller modern airports that can accommodate jet aircraft. Air Algérie, the national airline, provides international service. In 2001, 3,239,600 passengers were carried on domestic and international flights.